MR-CFD, the freelancing CFD simulation Company, is ready to fulfill every Computational Fluid Dynamics project. Our services include industrial and academic purposes considering a wide range of CFD simulations by the ANSYS Fluent software, which serves three main categories of Consultation, Training, and CFD Simulation. Order your project to be simulated in the shortest time and with the highest quality. The following flowchart represents the project order procedure:

The ANSYS Fluent battery model is provided as an add-on module with the standard ANSYS Fluent censed software. This module is accessible from the console with defined models addon-module. 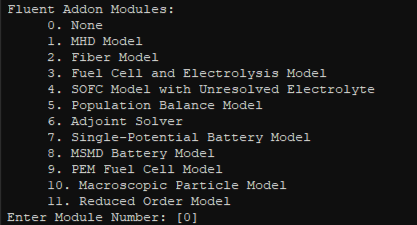 Modules 7 and 8 are related to battery simulation, and this document describes the model theory that includes mathematical equations and physical interpretations of independent and dependent variables used in the models.

Once you enable the battery model, the Energy equation will be automatically enabled to solve for the temperature field.

Given the important role of a battery in electric and/or hybrid electric vehicles, several models have been proposed to simulate the transient behavior of the rechargeable battery. These models vary in complexity from a zero-dimension resistor-capacitor to a multi-dimension potential current distribution. The general model available in the software is known as MSMD (Multi-Scale Multi physics Battery) model.

The computational domain includes only the anode and cathode electrodes and their current collectors. The separator layer is modeled as an infinitely thin interface between the two electrodes across which there is a potential jump due to loss. The battery geometry consists of a cell, and positive and negative tabs the cell consists of as active zone, and the tabs are as passive zone. Electrochemical reactions only accrue in active zones that the potential field solves in active and passive zones. 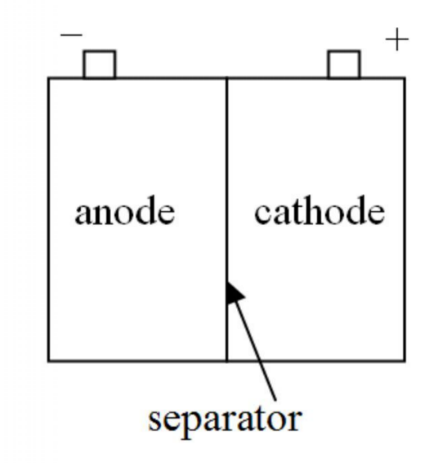 The battery model includes different tabs. The first tab is in model options. In the solution method section, 4 method is available to select. 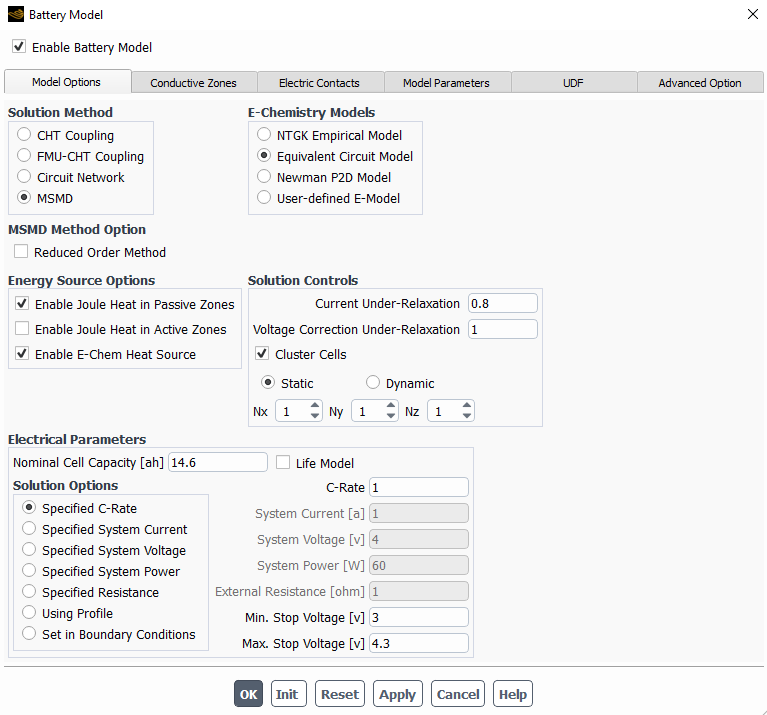 . CHT coupling: pure conjugate heat transfer method to simulate steady-state or transient heat production is known or obtained by other methods. The purpose of this simulation is to predict the temperature field of the module or pact.

This is the easiest method in the electric thermocouple.

. FMU-CHT coupling:  functional mock-up unit coupled is suitable for users who have used electrochemical models of various ECMs in the third-party component. It is used in ANSYS Fluent, and co-simulation can be achieved by importing FMU into fluent.

There are multiple models to study thermal behavior under discharge and charge conditions. These two theoretical models use porous electrodes and a concentrated charge condition. However, this way is not ideal for the heat treatment industry. The other is to use empirical parameters to predict the temperature evolution. The second approach is presently considered the best research direction. The two models widely used in commercial software are the equivalent semi-empirical model (ECM) and the Newman, Tiedemann, Gu, and kin (NTGK) model.

The NTGK model is set up by a curve fitting the experimental data. This model is used to obtain the total heat from an electrochemical reaction and predict the temperature distribution of the battery cell.

Newman p2D model The so-called pseudo-two-dimensional (P2D) model developed by the Newman group is probably the most widely used lithium-ion battery model of this type. It is composed of a one-dimensional macro-scale model describing the evolution of lithium concentration and electric potential in the electrolyte across the anode, separator, cathode, and micro-scale models for the electrodes.

. Enable joule heat passive/active source: to include the joule heating source in their thermal energy equation

. Enable E-chem heat source: to include the heat source due to electrochemistry in the thermal energy equation.

For Solution controls, you can set the current under the relaxation factor.

In the case of having a cluster cell for simplification, the cluster cell option is available, and the number of clusters can be added in their direction.

Note: this tab is available only with the MSMD method.

For electrical parameters, you can set the nominal capacity (the battery cell capacity). If you select lifetime, you can specify a nominal DoD value (depth of discharge). For the solution options, if you select :

. Specified C-Rate, The C-rate is the unit battery experts use to measure the speed at which a battery is fully charged or discharged. For example, charging at a C-rate of 1C means that the battery is charged from 0-100% in one hour. A C-rate higher than 1C means a faster charge. For example, a 3C rate is three times faster, so a full charge in 20 minutes. Likewise, a lower C-rate means a slower charge: C/5 (or 0.2C) would be five times slower than 1C, amounting to a five-hour charge. you can set the value for Discharge C-rate (the hourly rate at which a battery is discharged). In this case, the total current at the cathode tabs is fixed as the product of C-rate and nominal capacity while the electrical potential is anchored at zero on the anode tabs.

. specified system current, you can set a value for the total current (applied to the anode tabs). In this case, the electrical potential is set to zero at the anode tabs.

. specified system voltage. You can set a value for the system voltage ( applied to the cathode tab, the anode tab has a voltage of  0v).

For this single-cell case, there are no busbar zones. Electrochemical reactions occur only in the active zone. Battery tabs are usually modeled as passive zones, in which the potential field is also solved. 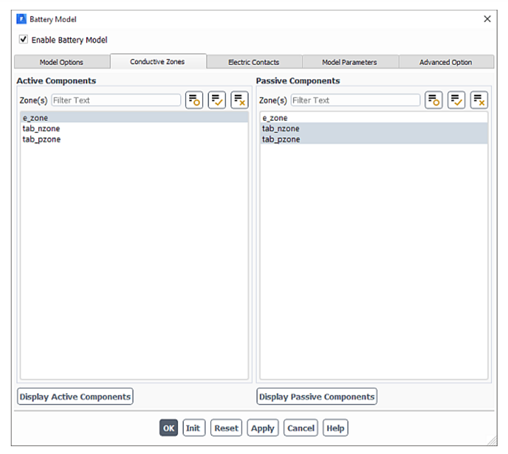 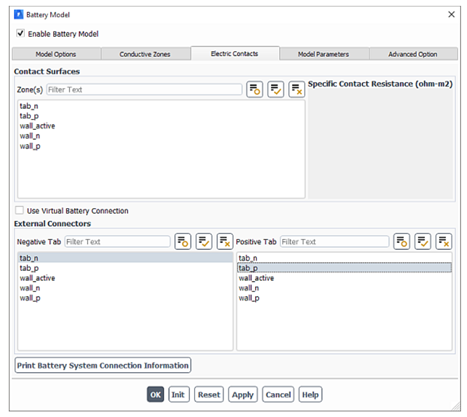 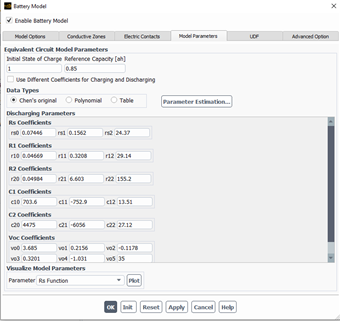 For the Electric Circuit Model, you can specify the function coefficients for the resistors’ resistances capacitors’ capacitances and the open circuit voltage (Voc) to be used in If you want to specify the ECM model functions in the polynomial form, select Using polynomials and enter parameters, In addition, you can turn on the Using different coefficient for charging and discharging option and specify the coefficients for Charging parameters.

The coefficient values for the Electric Circuit Model are battery specific and need to be specified before conducting a simulation. The default values are taken from Chen If you model a battery of a different design, you should specify a different set of battery parameters. 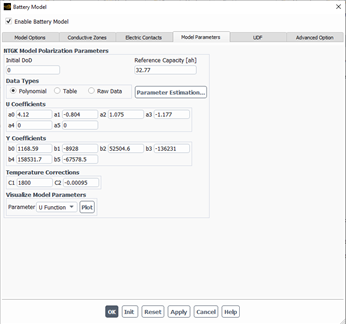 For the NTGK model, you can specify the U coefficients, Y coefficient, and temperature correction. The coefficient values for the NTGK Model Polarization Parameters are based on battery cell polarization test curves. Obtaining coefficient values (other than the default values) can be dependent on your battery configuration and material properties. The default values are taken from Kim’s paper. If you model a battery having a different design, you must provide a different set of battery parameters. 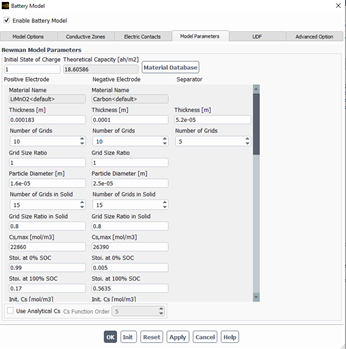 Complete and comprehensive explanations of all inputs are available in the software documentation.