What is Open Channel flow?

The flow of liquid through a channel with a free surface is defined as open channel flow. This free surface of the liquid is subjected to atmospheric pressure. Hence, open channel flow can also be defined as liquid flow through a passage at atmospheric pressure. The flow in an open channel occurs due to gravity that provides a bed slope. The liquid flow through the open channel can be of several types: steady and unsteady flow, laminar or turbulent flow, uniform or non-uniform flow, and finally, sub-critical, critical, and supercritical flow. 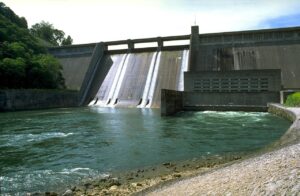 ANSYS FLUENT can model the effects of open channel flow (e.g., rivers, dams, and surface-piercing structures in unbounded streams) using the V.O.F. formulation and the open channel boundary condition. These flows involve a free surface between the flowing fluid and fluid above it (generally the atmosphere). In such cases, wave propagation and free surface behavior become essential. The forces of gravity and inertia generally govern flow. This feature is mostly applicable to marine applications and the analysis of flows through drainage systems.

Open channel flows are characterized by the dimensionless Froude Number, which is defined as the ratio of inertia force and hydrostatic force.

Where V is the velocity magnitude, g is gravity, and y is a length scale, in this case, the distance from the bottom of the channel to the free surface.

MR-CFD, an expert in the field of heat transfer simulations

Having several years of experience in simulating a wide range of problems in various C.F.D. Using Fluent software, the MR-CFD team is ready to offer extensive modeling, meshing, and simulation services. Simulation Services for open channel simulations are categorized as follows:

Our services are not limited to the mentioned subjects, and the MR-CFD team is ready to undertake different and challenging projects in the heat transfer field ordered by our customers. You can consult with our experts freely and without charge at first, and then order your project by sending the problem details to us using the following address.

By entrusting your project to the MR-CFD team, you will not only receive the related project’s files (Geometry, Mesh, Fluent files). Also, you will be provided with an extensive tutorial video demonstrating how you can create the geometry, mesh, and define the needed settings in the Fluent software all by yourself. And these all come with post-technical support from the MR-CFD team.

Benefit from MR CFD expert consultation for academic and industrial projects. You can also order your specific CFD Projects to be investigated, simulated, and trained by MR CFD experts. Order your CFD project and enjoy the consultation service quality.