What is Aircraft Icing?

In-Flight Airframe Icing occurs when supercooled water freezes on impact with any part of the external structure of an aircraft during flight. Although the nominal freezing point of water is 0°C, water in the atmosphere does not always freeze at that temperature and often exists as a “supercooled” liquid. If the surface temperature of an aircraft structure is below zero, then moisture within the atmosphere may turn to ice as an immediate or secondary consequence of the contact. 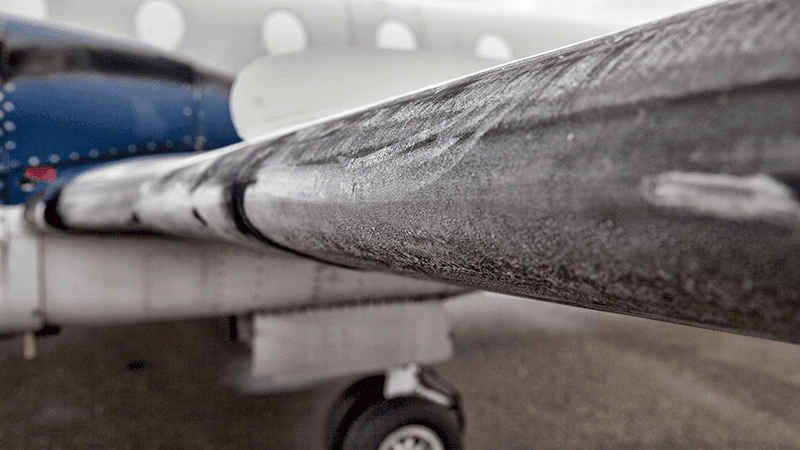 Considerable quantities of atmospheric water exist in liquid form well below 0°C. The proportion of supercooled water decreases as the static air temperature drops by about -40°C. Almost all of it is solid. The size of supercooled water droplets and the nature of the airflow around the aircraft surface determine the extent to which these droplets will strike the surface. The size of a droplet will also affect what happens after such impact – for example; larger droplets will often be broken up into smaller ones. Finally, the size of a water droplet is broadly proportional to the mass of water it contains. This mass determines the time required for the physical state to change from liquid (water) to solid (ice).

Larger droplets that do not break up into smaller ones will take longer to freeze because of the greater release of latent heat and may form a surface layer of liquid water before this change of state occurs. Airframe Icing can lead to reduced performance, loss of lift, altered controllability, and ultimately stall and subsequent loss of aircraft control. Using ice protection systems, several methods exist to reduce the dangers of icing. The simplest is to avoid icing conditions altogether, but this is not practical for many flights.
If ice (or other contaminants) are present on an aircraft before takeoff, they must be removed from critical surfaces. Removal can take many forms:
⦁ Mechanical means, which may be as simple as using a broom or brush to remove snow
⦁ Application of deicing fluid or hot water removes ice, snow, etc.
⦁ Use of infrared heating to melt and remove contaminants
⦁ Putting the aircraft into a heated hangar until snow and ice have melted
⦁ Positioning aircraft towards the Sun to maximize heating up snow and ice-covered surfaces. In practice, this method is limited to thin contamination by the time and weather conditions.
These methods remove existing contamination but provide no practical protection in icing conditions. If icing conditions exist or are expected before takeoff, then anti-icing fluids are used. These are thicker than deicing fluids and resist the effects of snow and rain for some time. They are intended to shear off the aircraft during takeoff and provide no inflight protection.
To protect an aircraft against icing in-flight, various forms of anti-icing or deicing are used:
⦁ A common approach is to route the engine “bleed air” into ducting along the leading edges of wings and tailplanes. The air heats the leading edge of the surface, which melts or evaporates ice on contact. The air is extracted from the engine’s compressor section on a turbine-powered aircraft. If the aircraft is turbocharged piston-powered, bleed air can be scavenged from the turbocharger.
⦁ Some aircraft are equipped with pneumatic deicing boots that disperse ice buildup on the surface. These systems require less engine bleed air but are usually less effective than a heated surface.
⦁ A few aircraft use a weeping wing system with hundreds of small holes in the leading edges and releases anti-icing fluid on demand to prevent ice buildup.
⦁ Electrical heating is also used to protect aircraft and components (including propellers) against icing. The heating may be applied continuously (usually on small, critical components, such as pitot-static sensors and angle of attack vanes) or intermittently, giving an effect similar to the use of deicing boots.
Usually, only critical aircraft surfaces and components are protected in these cases. In particular, only the leading edge of a wing is usually protected.

You can see the project Icing of a 3-D Airfoil Surface link below, which is carried out by the MR-CFD team: 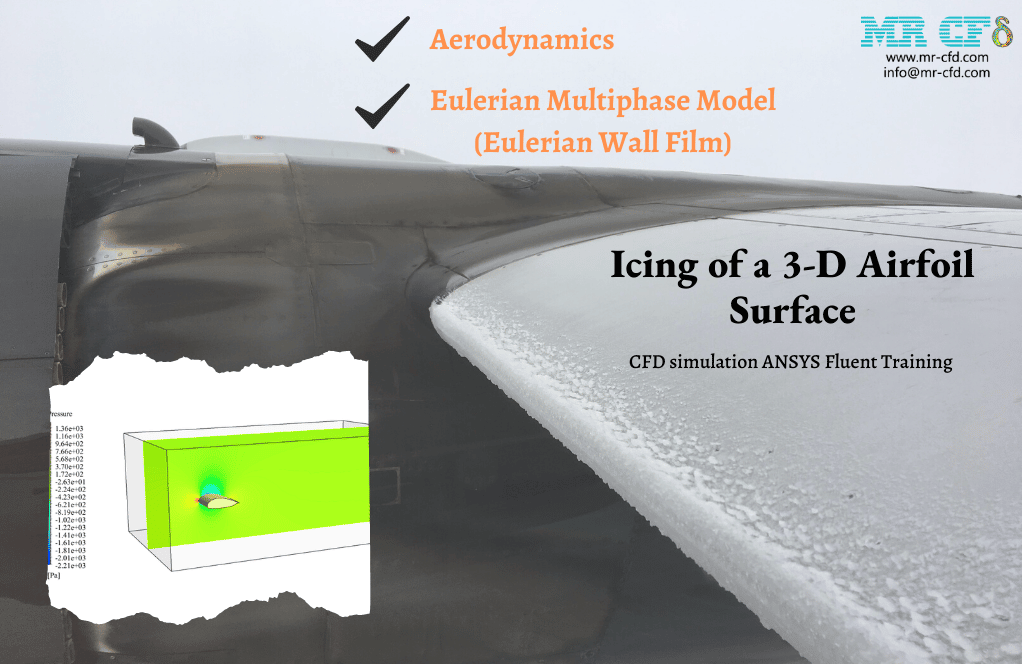 With several years of experience in simulating various problems in various CFD fields using ANSYS Fluent software, the MR-CFD team is ready to offer extensive modeling, meshing, and simulation services based on the need of our customers. Our services are not limited to the mentioned subject, and the MR-CFD team is ready to undertake different and challenging projects. You can consult with our experts freely and without charge and order your project by sending the problem details to us using the following address.