A powered device that moves air is called a fan. A fan is made up of a spinning arrangement of vanes or blades that affect the air and are often constructed of wood, plastic, or metal.

Although the two types of fans might seem to operate the same, there are some significant variances in their construction and performance. Cost is typically the biggest differentiator between the two varieties. General-purpose fans are made for the home or light-duty business sectors and employ the least expensive materials and components. Homes, appliances, and little ventilation systems all employ these fans. Industrial fans are made of tougher materials and parts so they can last longer, provide more airflow and pressure, and adhere to stringent environmental and ambient specifications.

Axial fans come in the shape of cylindrical wheels with a bushing attached to the impeller that is positioned at an angle to the plane of rotation. Air is trapped between the impeller blades and is forced further axially as they rotate. In the radial direction, the air is rarely moved. The axial fan blades are mostly set directly on the motor shaft.

They are used in systems with low air dynamic resistance for air supply and air extract through openings or combined to a maximum of 3 m air ducts. 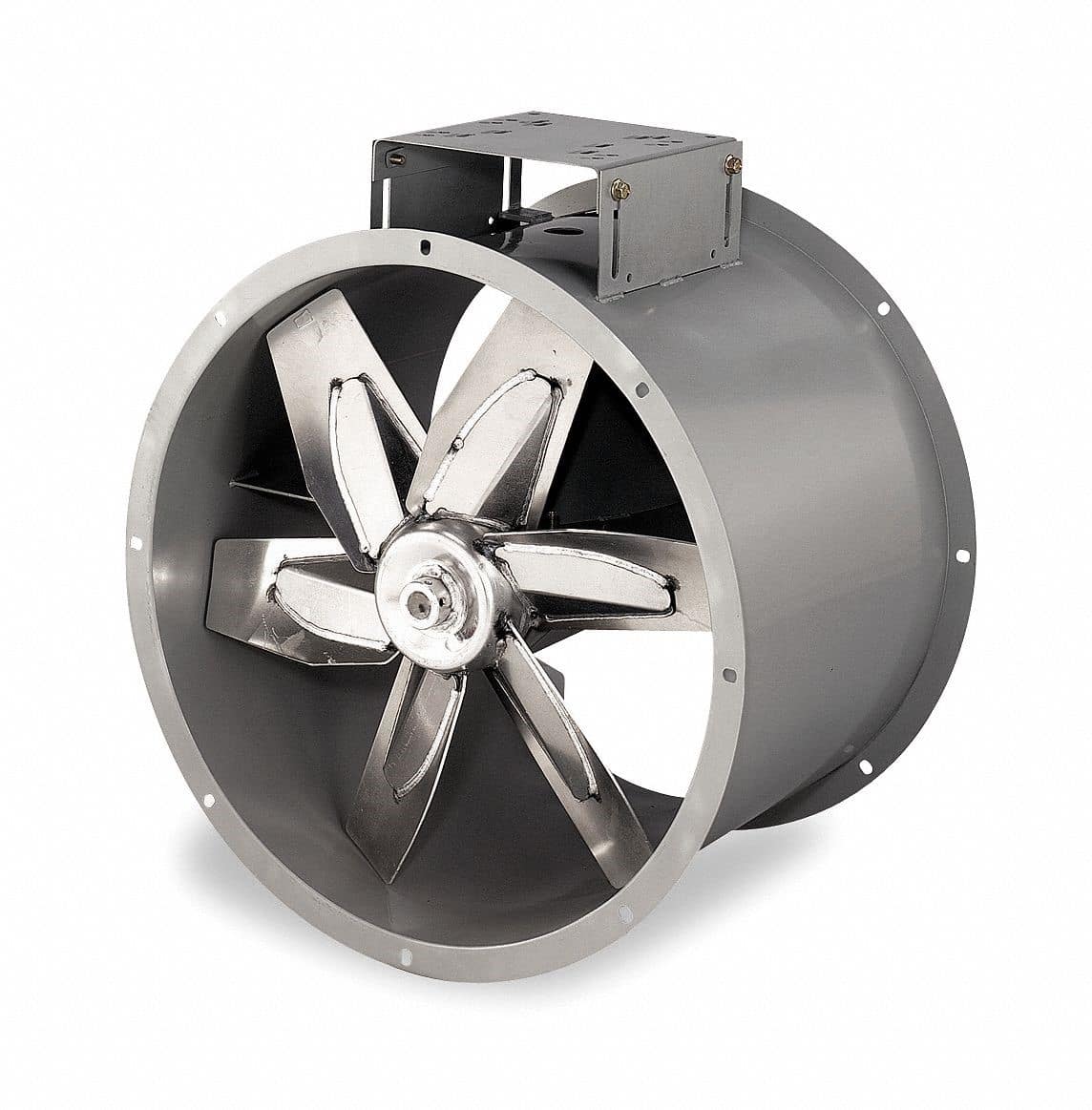 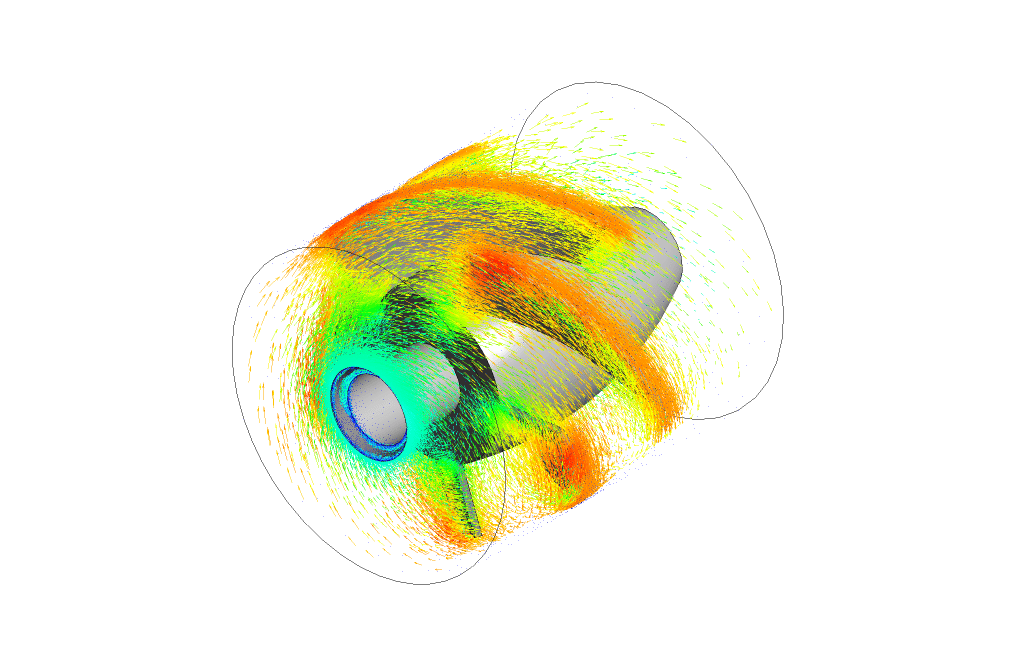 A scroll casing and an impeller make up a centrifugal fan. An impeller is a hollow cylinder with mounted blades secured around the circumference by disk plates. The hub for mounting the impeller on the shaft is in the middle of the strengthening ring.

Air is compressed and transported out from the impeller’s center when operating. It is trapped between the blades. Air is driven to the scroll case by centrifugal force, which is subsequently transferred to the exhaust pipe. The centrifugal fans have curved blades that face either forward or backward. Blades that are curved backward can save up to 20% of energy. The high air overload capacity of backward-curved blades is another significant advantage. Although they need a smaller impeller diameter and lower speed, centrifugal fans with forward-curved blades guarantee the same air capacity and pressure characteristics as those with backward-curved blades. So they can get the desired outcome while using less room and making less noise. 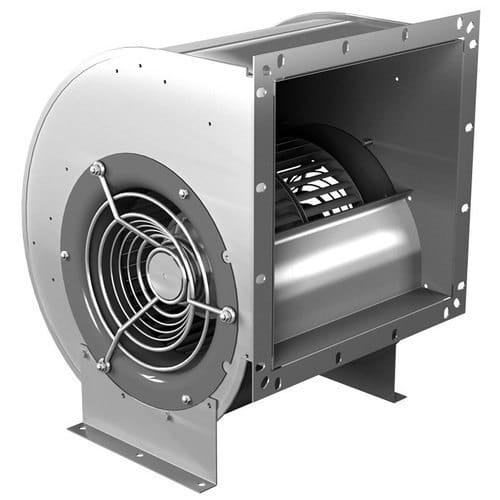 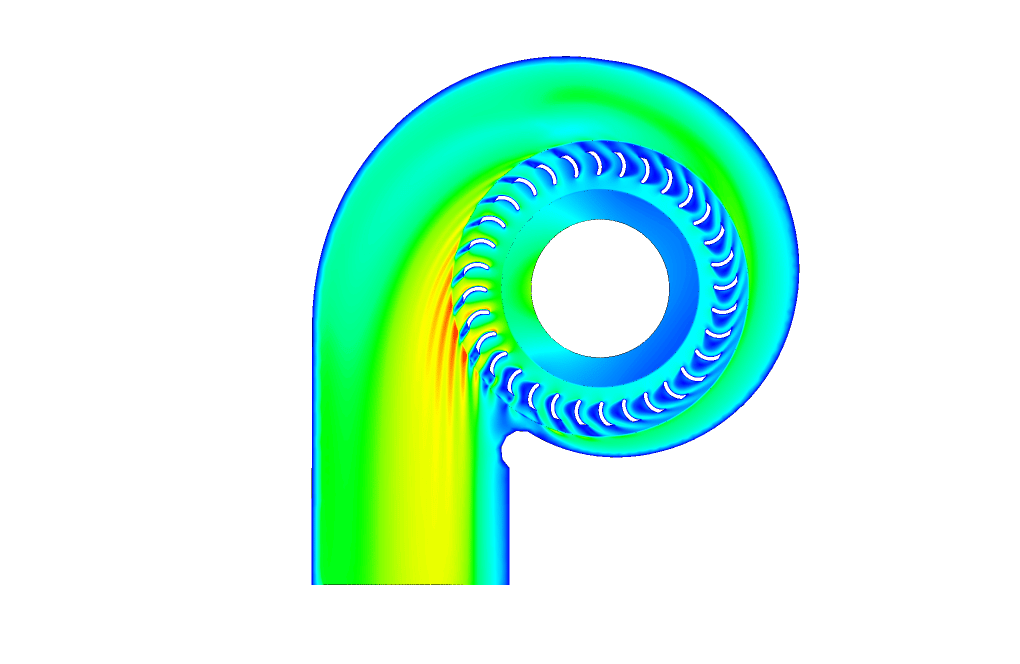 How to Model a FAN inside ANSYS Fluent

Ansys Fluent software has different models for fan simulation, which are introduced below. Each model has its advantages and disadvantages that help us to choose the best model for the desired simulation.

The fan model is a model with lumped parameters that may be used to assess how a fan with specified characteristics would affect a broader flow field. With the fan boundary type, you may enter an empirical fan curve that describes the connection between flow rate (velocity) and head (pressure increase) over a fan element. The fan swirl velocity can also have radial and tangential components specified. The fan model does not accurately describe the intricate flow through the fan blades. Instead, it forecasts how much air will pass through the fan. Fans may be employed as the only flow source in a simulation or in combination with other flow sources. The system flow rate is established in the latter scenario by balancing system losses with the fan curve.

The fan model does not adequately show the complex flow through the fan blades. Instead, it forecasts how much air will pass through the fan. Fans may be utilized as the only flow source in a simulation or in combination with other flow sources. In the latter scenario, the balance between system losses and the fan curve determines the system flow rate. 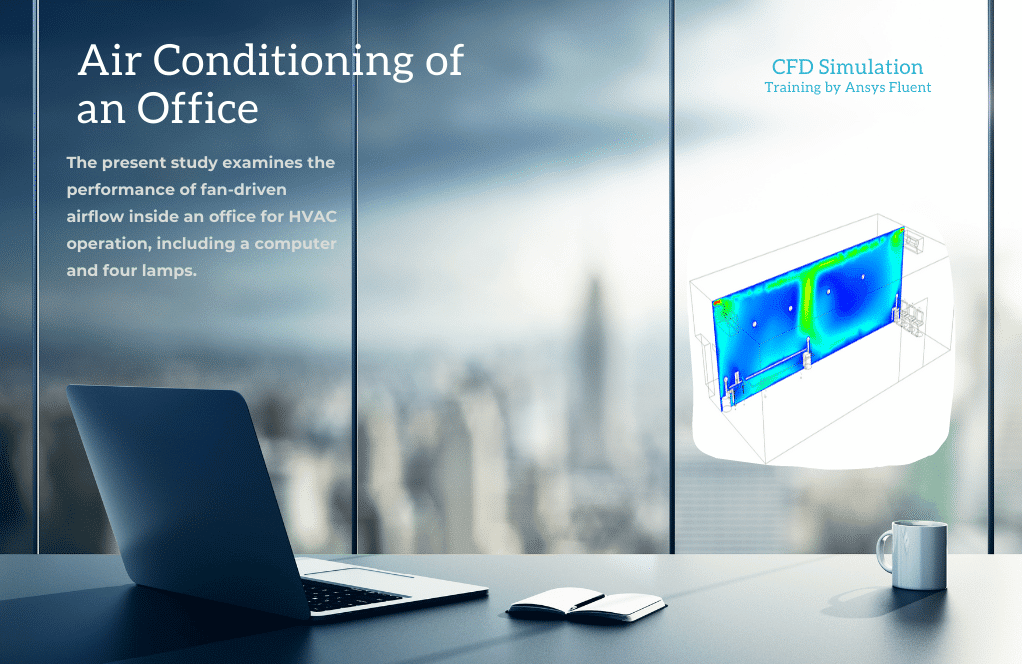 In order for the flow through the fan to face a pressure rise, you must carefully model the exhaust fan. The fan is regarded as an inlet vent with a loss coefficient of unity in the case of reversed flow.

Exhaust fan Boundary condition is used in the following project: 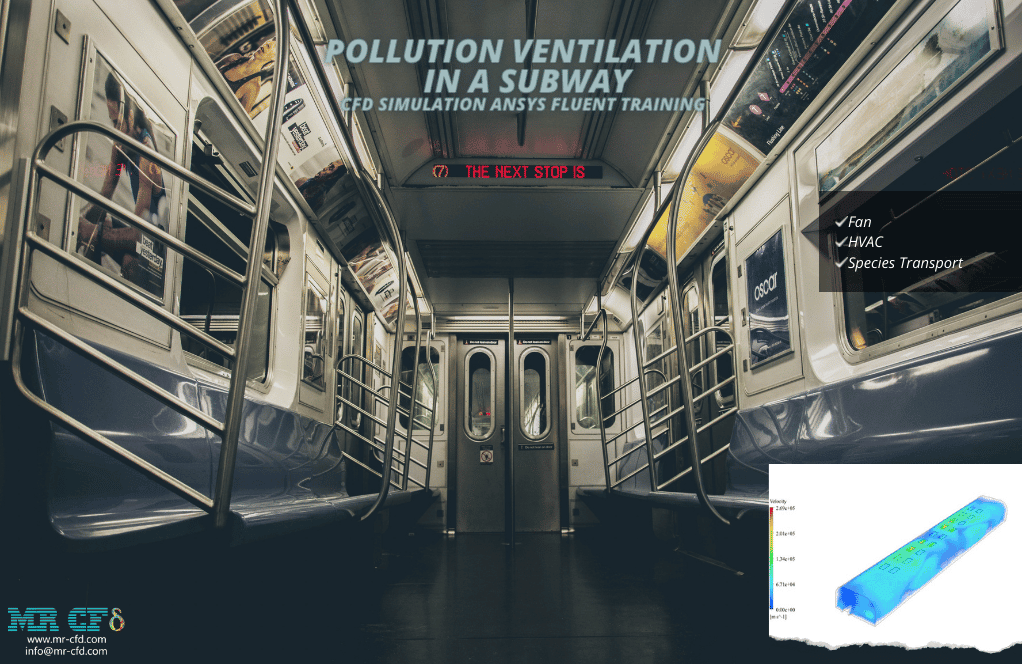 Intake fan boundary condition options are fully similar to the exhaust fan ones. Using this BC, an external intake fan can be modeled with a given pressure jump, flow direction, ambient (intake) pressure, and temperature. 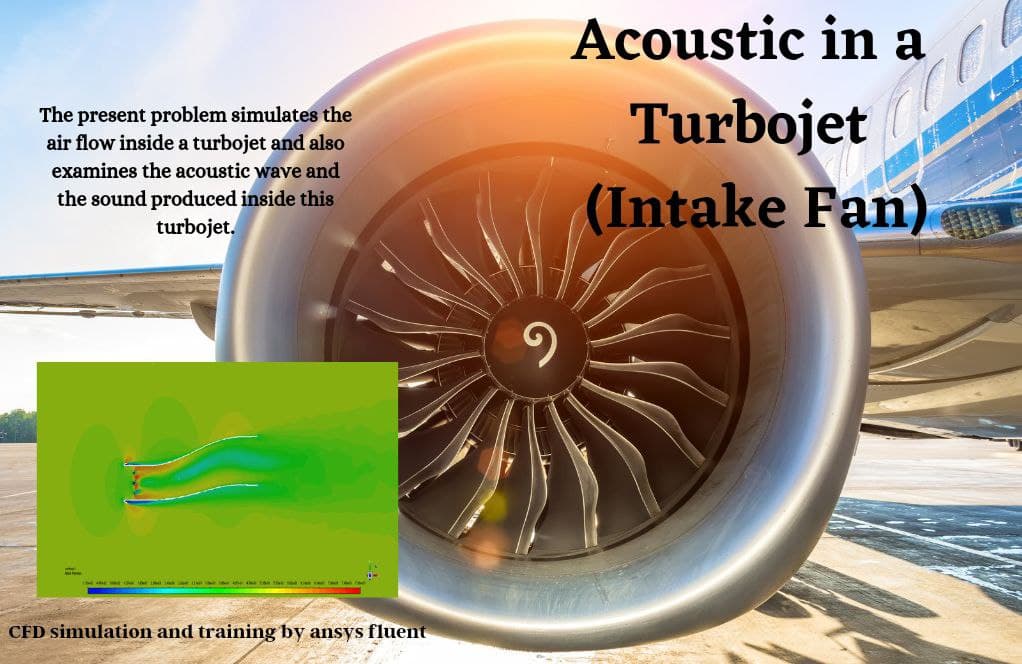 Also, by using the mass flow and the velocity inlet boundary conditions, it is possible to simulate the airflow entry into the domain, which can be a replication of a blowing fan in different amounts of air.

On the other hand, mass flow and the velocity outlet boundary conditions simulate the exhalation of a fan at a defined area. 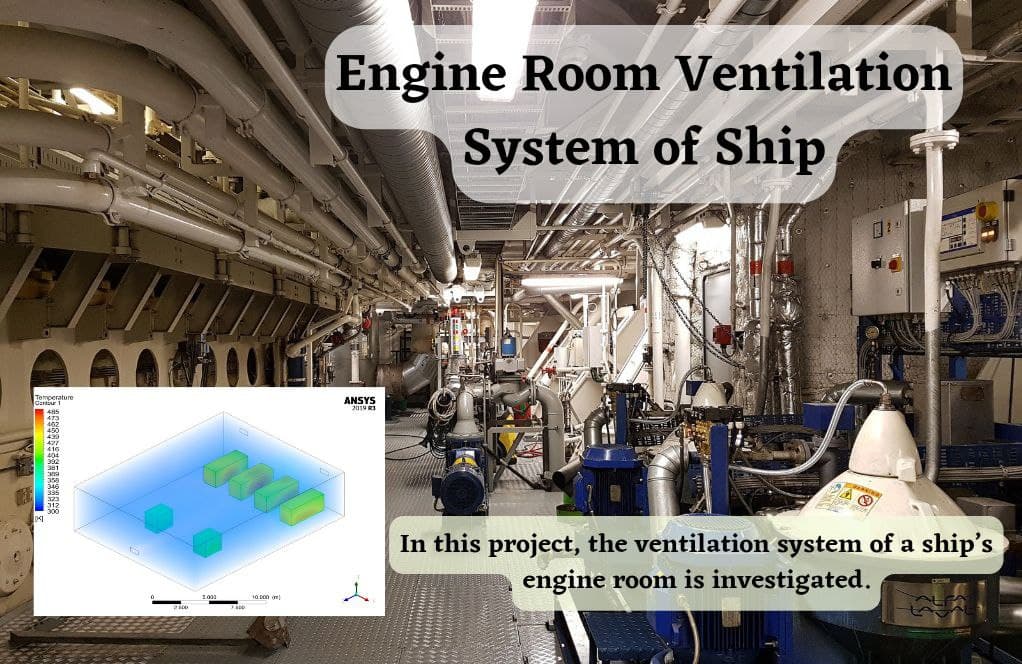 A distributed momentum source is applied in a fluid volume structured like a toroid to create 3D fan zones, which replicate the action of an axial fan (that is, a blade-swept volume). In contrast, fan boundary conditions (such as an intake-fan boundary zone) are based on a lumped parameter model in which the fan is assumed to be infinitely thin, and a discontinuous pressure rise is described as a velocity function.

Also, In contrast to fan boundary conditions, which are primarily used to model the axial flow and need you to enter swirl and radial coefficients, 3D fan zones can compute swirl and radial velocities. 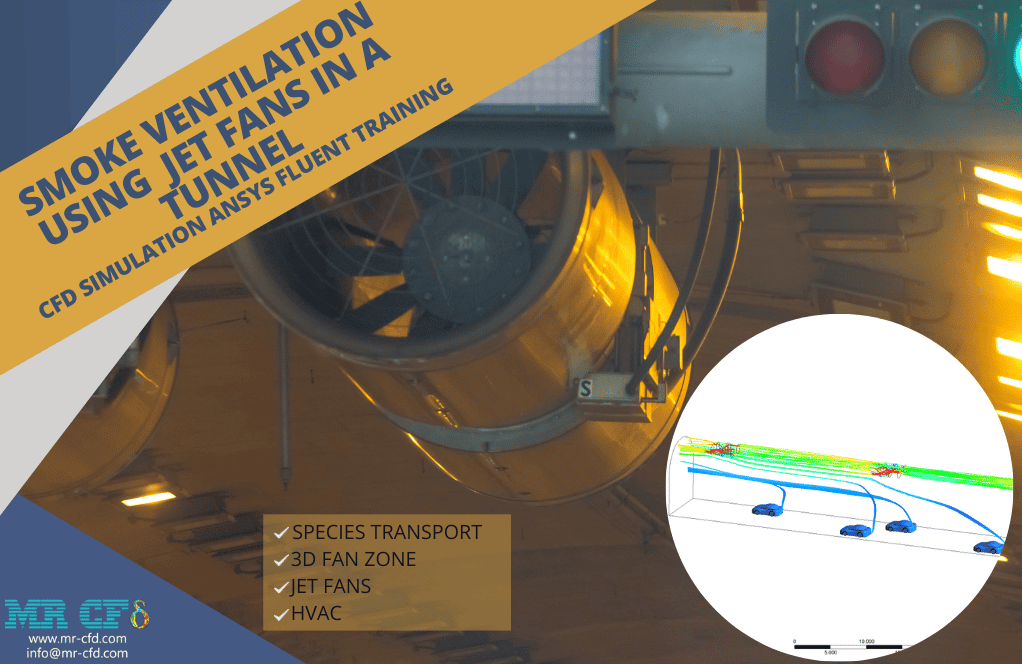 In conclusion, the mentioned approaches could be carried out to simulate the fan action without the geometry of the fan imported to the solution. In the case of the imported fan blade geometry, MRF, Moving Mesh, and Dynamic Mesh methods are able to rotate the fan in order to inhale or intake the air into the desired domain.

With several years of experience simulating various problems in various CFD fields using ANSYS Fluent software, the MR-CFD team is ready to offer extensive modeling, meshing, and simulation services. MR-CFD team is an expert in simulating projects in which axial fans are needed to be simulated. Using this feature, MR-CFD provides customers with a low-cost and straightforward model that can precisely emulate airflow circulation inside a space compared with reality. A fan is considered infinitely thin, and the discontinuous pressure rise across it is specified as a function of the velocity through the fan. The relationship may be a constant, a polynomial, piecewise-linear, piecewise-polynomial function, or a user-defined function.

You must be careful to model the fan so that a pressure rise occurs for forwarding flow through the fan. For three-dimensional problems, the values of the convected tangential and radial velocity fields can be imposed on the fan surface to generate a swirl. These velocities can be specified as functions of the radial distance from the fan center. The relationships may be constant or polynomial functions, or user-defined functions.

Our services are not limited to the mentioned subjects. The MR-CFD team is ready to undertake different and challenging projects—in which Fan models must be implemented—ordered by our customers. You can consult with our experts freely and without charge and order your project by sending the problem details to us using the following address.