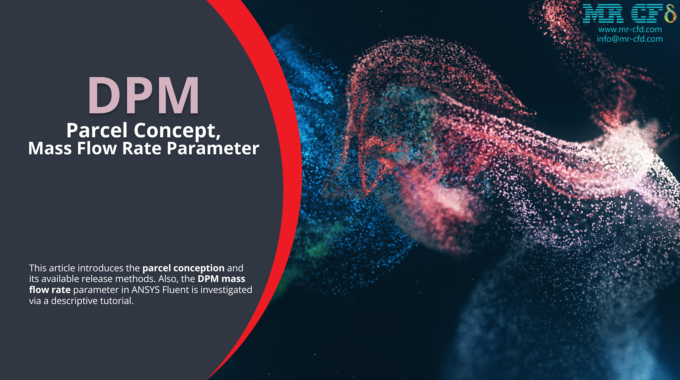 This article introduces the parcel concept and its available release methods. Also, the DPM mass flow rate parameter in ANSYS Fluent is investigated via a descriptive tutorial.

Parcel in ANSYS Fluent software is defined as a group of monologue particles with similar properties such as diameter, velocity, position, shape, etc. The parcel’s properties are considered the same as particles. In another view, each parcel represents a fraction of the total mass flow rate.

Parcel concept is related to the computational cost as it is costly to calculate the trajectory of every particle in the flow domain. It should be noted that since the particles have similar properties in each cell (there are unique properties there), the parcels assumption is entirely correct. Generally, the more parcels are used, the more accuracy and convergence of the solution but also the higher the computational cost.

There are four methods to define parcels in Ansys Fluent software:

When the standard method is chosen, the following relation will be used to determine the number of particles in each parcel:

While is the mass flow rate of particles,  Is the particle mass, and is the time step size.

The concept of mass flow rate may become unclear now. In the following, we have made efforts to clarify the mass flow rate effect on injection parameters and how ANSYS Fluent acts with the given value.

The following tutorial investigates the mesh size on injection. It is concluded that the mass flow rate the user defines is the total number of particles, but the division into parcels and injection mechanism can differ based on the mesh grid. The tutorial is based on a simple particle injection in a box as can be seen below: 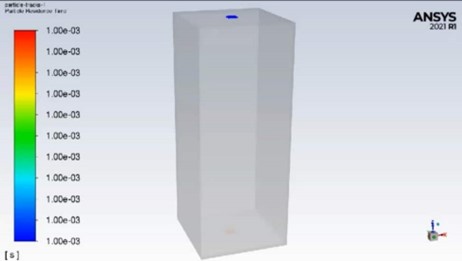 As shown below, nine parcels are on the surface, considering the constant mass flow rate. If the total number of particles is 100, there would be about 11 to 12 particles (100/9) in each parcel. 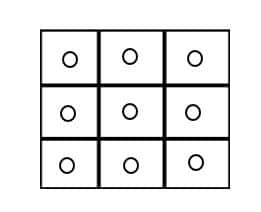 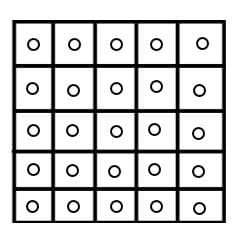 If we continue making cells smaller, they will reach 10*10 at the inlet boundary in which there is only one single parcel, so the diameter of the parcel is equal to the particle. However, the issue is controversial as the cell’s size gets smaller, the parcel’s volume fraction becomes more than 10-12% of the cell volume. Discussed condition is a barrier for analyst engineers when using the Discrete Phase Model, and the issue is more critical when the particles have a larger diameter.

To conclude, we can say that in the DPM model, there are both large and small cell size limitations, and the discrete phase model is sensitive to elements with very small sizes.