The present problem simulates two-phase flow of air and water in a distillation column tray.

There are some free products to check the service quality.

To order your ANSYS Fluent project (CFD simulation and training), contact our experts via [email protected], online support, and WhatsApp.

The present problem simulates two-phase flow of air and water in a distillation column tray using ANSYS Fluent software. In tray towers, the process of separating the material takes place. The operation of a tray distillation tower is such that hot and rising steam enters the chamber from the lower part of the chamber through several small holes and moves upwards; Simultaneously, a liquid stream enters the chamber from the upper part of the chamber through a large hole and falls to the bottom. As a result, this liquid flow and air vapor collide on one or more trays inside the chamber.

This contact, on the other hand, causes the temperature of the descending liquid to rise, and as a result, part of the liquid particles, which are light and have a low boiling point, turn into steam sooner; On the other hand, it reduces the rising steam temperature and as a result distills part of the steam. This operation causes the vapor from the evaporation of the liquid to be rich in volatile (materials with lower boiling points or higher pressures); Also, the liquid is left with heavier particles and accumulates, which gradually increases their boiling point.

Of course, the higher the level of contact created in the tray between the liquid and gas phases, the higher the separation operation. The present work merely simulates the fluids of a two-phase model and investigates the behavior of liquid and gas phases in relation to each other at the tray location; Thus, this work does not simulate heat transfer and the process of evaporation and distillation. Since the present model consists of two phases of air and water, the multi phase VOF model has been used.

The flow of pure air travels upwards through five small circular holes embedded in the lower part of the chamber at a speed of 23.35 m.s-1 and exits through five open-facing holes at the top of the chamber; While the flow of pure water with a mass flow rate of 4 kg.s-1 enters the chamber through a side hole and exits through a hole embedded in the bottom of the model by moving downwards. The place for the two-phase contact is a tray modeled in the middle of the tower enclosure, which consists of five circular holes on its surface and water flows through it.

The present 3-D model is designed using Design Modeler software. The geometry of the model includes a chamber with a tray distillation tower. Due to the fact that the present model has a symmetrical structure, half of the chamber has been modeled to prevent the increase of the computational process.

The upper part of the designed chamber consists of a semicircular surface with a radius of 0.6065 m, which has a height of 1.22 m and is located on the lower part of the chamber with a height of 0.61 m. Inside the upper part of the chamber, an airflow inlet plate consisting of five small circular vents 0.02 cm in diameter, an airflow outlet plate consisting of the same five vents, and a center plate called a tray as the liquid flow contact point, and the gas consists of the same five holes and is designed next to the water inlet flow hole. The distance of this tray from its upper and lower plates is equal to 0.61 m.

The following figure shows a view of the geometry. 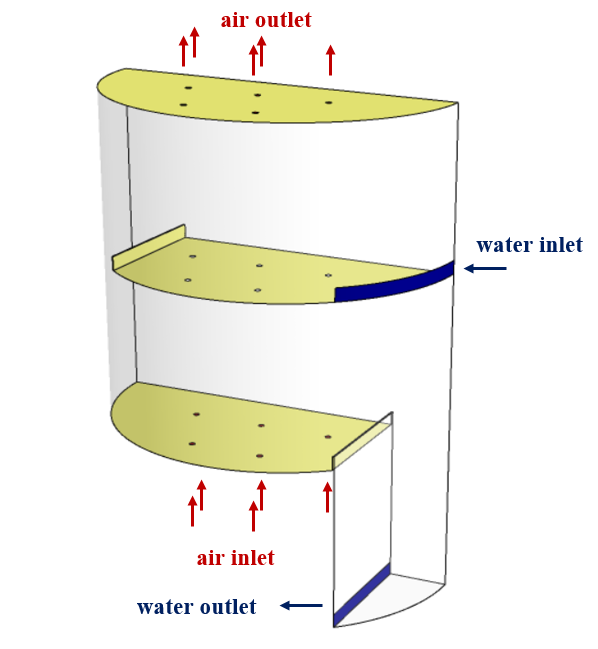 The meshing of the model has been done using ANSYS Meshing software and the mesh type is unstructured. The element number is 866590. The following figure shows the mesh. 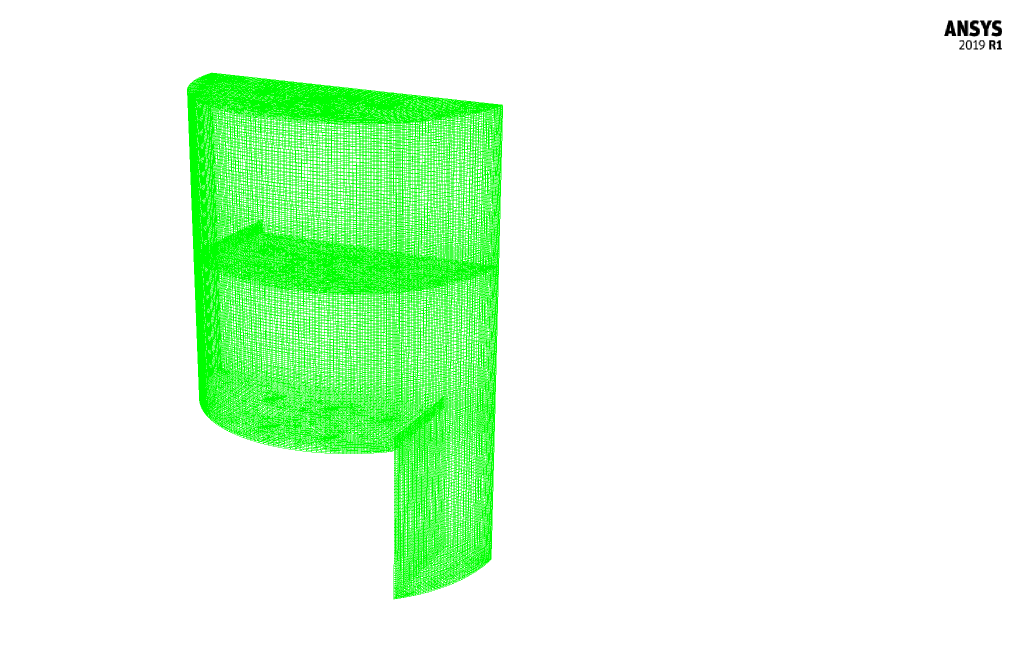 To simulate the present model, several assumptions are considered:

A summary of the defining steps of the problem and its solution is given in the following table:

At the end of the solution process, two-dimensional and three-dimensional two-phase mixture pressure and velocity contours, volume fractions related to the water phase and gas phase, and mixture velocity vectors are obtained. The two-dimensional contours are drawn at a distance of 0.2 m from the center plane and passing through three holes for the passage of air flow.