The current project simulates combustion in a gas flare system using ANSYS Fluent software. We perform this CFD project and investigate it by CFD analysis.

The present model is designed in three dimensions using Design Modeler software. Due to the model’s symmetrical structure and to reduce the computational cost, only a 120-degree segment of the geometry is modeled.

The flare model has a cylindrical structure located inside a cylindrical computing space. Different sections, such as steam, gas flow, and pilot, are defined at the tip of the flare.

The meshing of the model has been done using ANSYS Meshing software. The element number is 1043138.

The flare system, also known as a gas flare, is a combustion device used in industrial units such as oil and gas refineries and the production of oil and gas wells, especially on offshore platforms. The Species Transport model has been used to carry out this project. 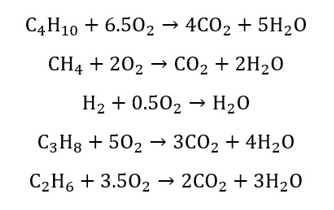 At the tip of the flare, a gas flow with a flow rate of 0.09259 kg/s enters the environment in the form of a combination of hydrocarbons. At the same time, a methane flow from the pilot flame and a steam flow from the steam inlet boundary, both at velocities of 2.479 m/s, enter the domain to ignite the mixture.

Also, the standard k-epsilon model can solve the turbulent fluid equations and the energy equation, which is used to calculate the temperature change within the combustion chamber.

At the end of the solution process, three-dimensional contours related to the velocity and mass fraction of each gas species modeled in this simulation are obtained.

Also, as can be seen, the mass fraction of species considered in the fuel mixture decreases as we get away from the fuel inlet boundary. In contrast, the mass fractions of chemical species of reaction products increase along this way.