Click on Add To Cart and obtain the Geometry file, Mesh file, and a Comprehensive Training Video.

An air-breathing jet engine, known as a ramjet, compresses incoming air instead of utilizing a rotary compressor by moving the engine forward. A ramjet cannot operate at zero airspeeds; hence it cannot be utilized to power an aircraft throughout all phases of flight. A ramjet-equipped aircraft needs additional propulsion to accelerate it to a speed where the ramjet can provide thrust. 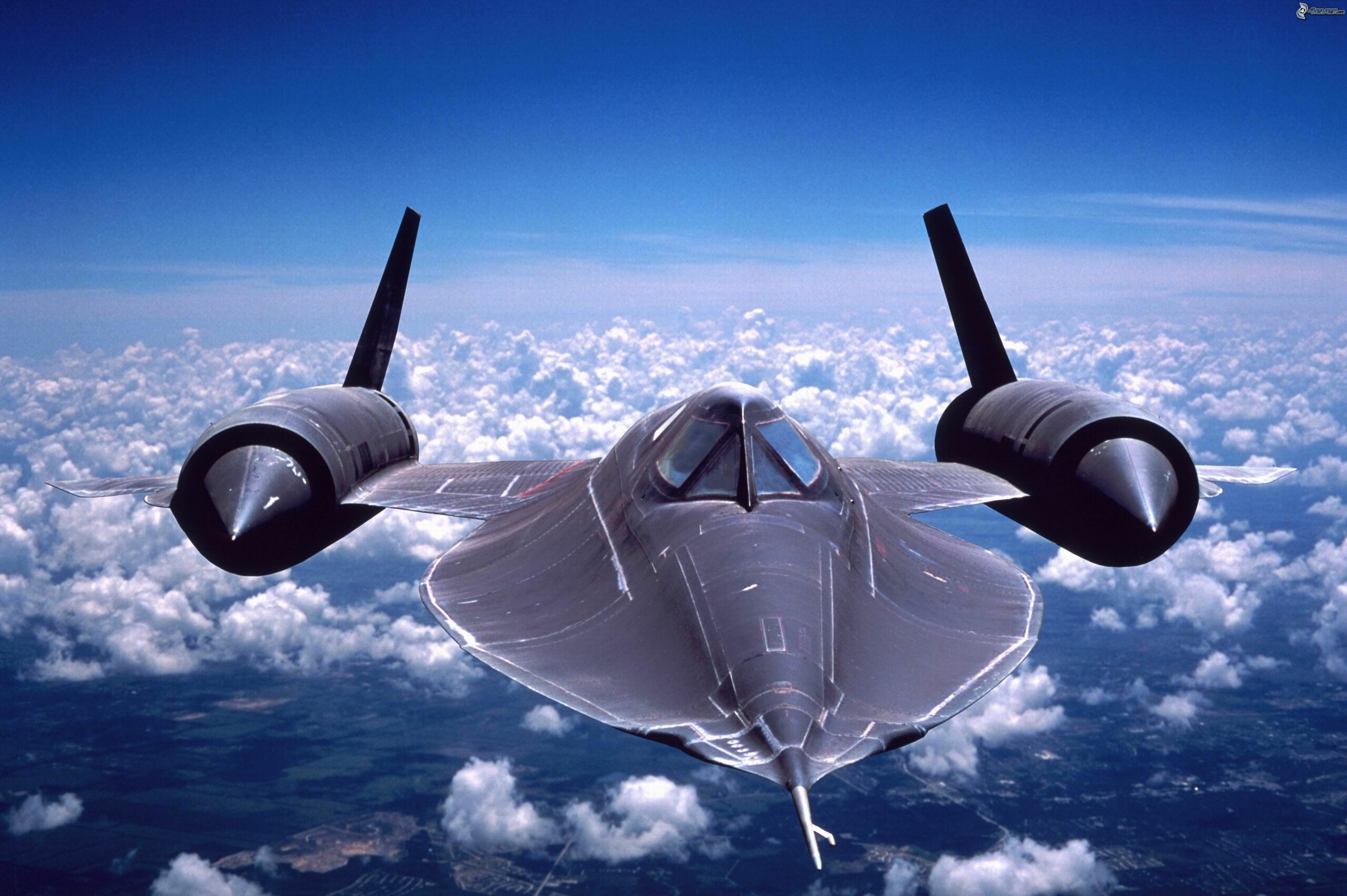 In the combustor of a ramjet, combustion that generates thrust happens at a subsonic speed. The aircraft inlet must slow the air entering the engine for a vehicle operating at supersonic speeds. The propulsion system suffers performance losses due to shock waves in the inlet. Ramjet propulsion is relatively inefficient over Mach 5.

In this situation, fuel is crucial. When considering other beneficial factors, such as the fact that the air’s overall Temperature is high at high Mach numbers, hydrogen is especially advantageous due to its well-known relatively short inflammatory delay.

In this simulation, an SR-71 Black Bird moving with a Mach number of 3.3 is considered. The point is to model the ramjet engine to capture what happens there and investigate the parameters.

In the next step, 3 crucial parameters are selected, and the solution is optimized using the DOE method in ANSYS Workbench software.

As mentioned above, the first step is to simulate the engine of the SR-71 Black Bird, which is a ramjet engine without any moving object inside. The jet is moving with a Mach number of 3.3. There is an injection slot inside the chamber at a distance of 70 cm from the chamber inlet. The fuel, which is hydrogen, is injected into the engine with a mass flow rate ratio of 1 to 50 relevant to the air. Notably, the injection angle is 0 degrees, meaning the fuel is injected perpendicular to the airflow.

The model of the ramjet engine and the solution results are visible in the following figures, considering different significant parameters for us. 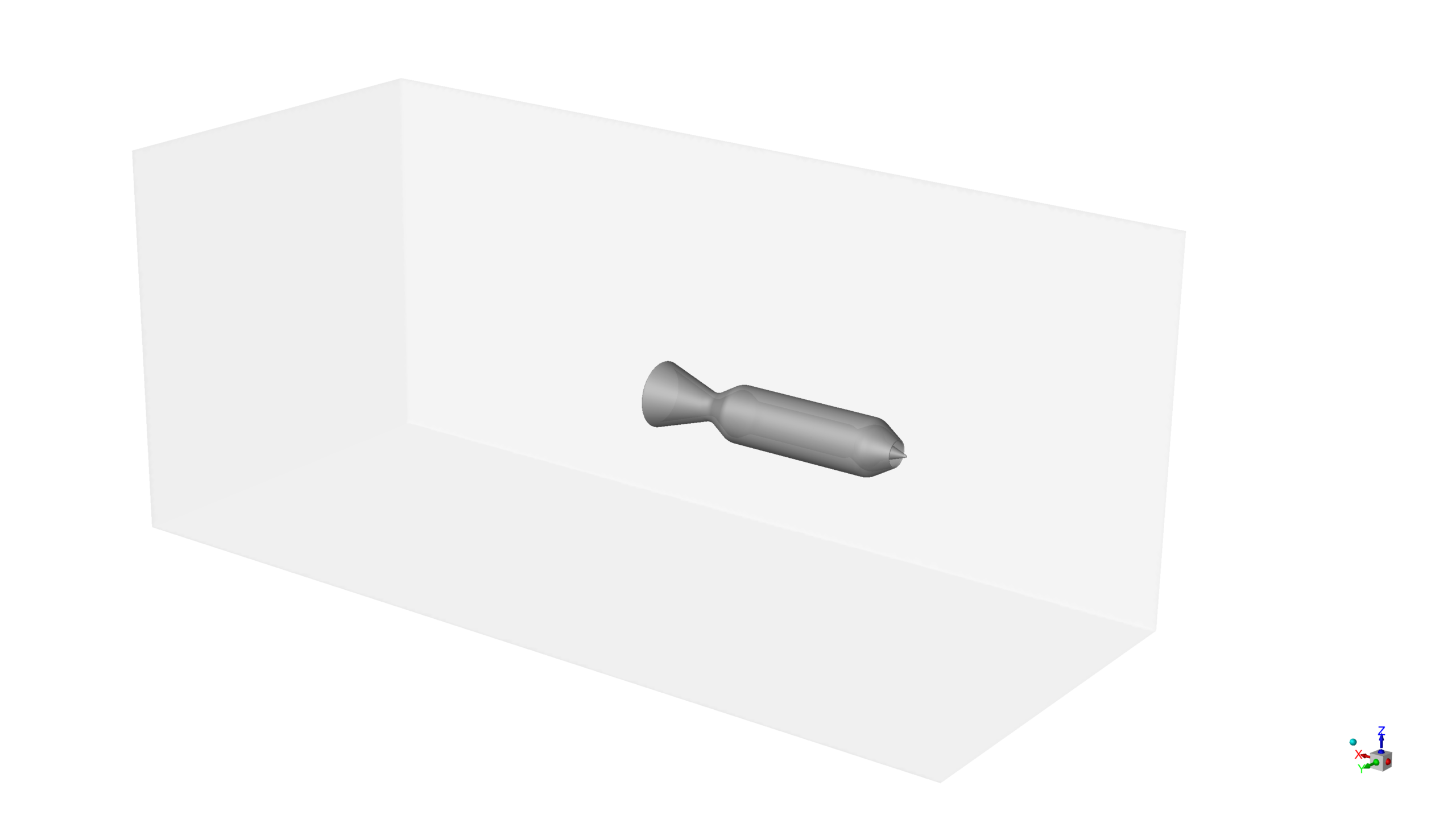 The geometry of the Project 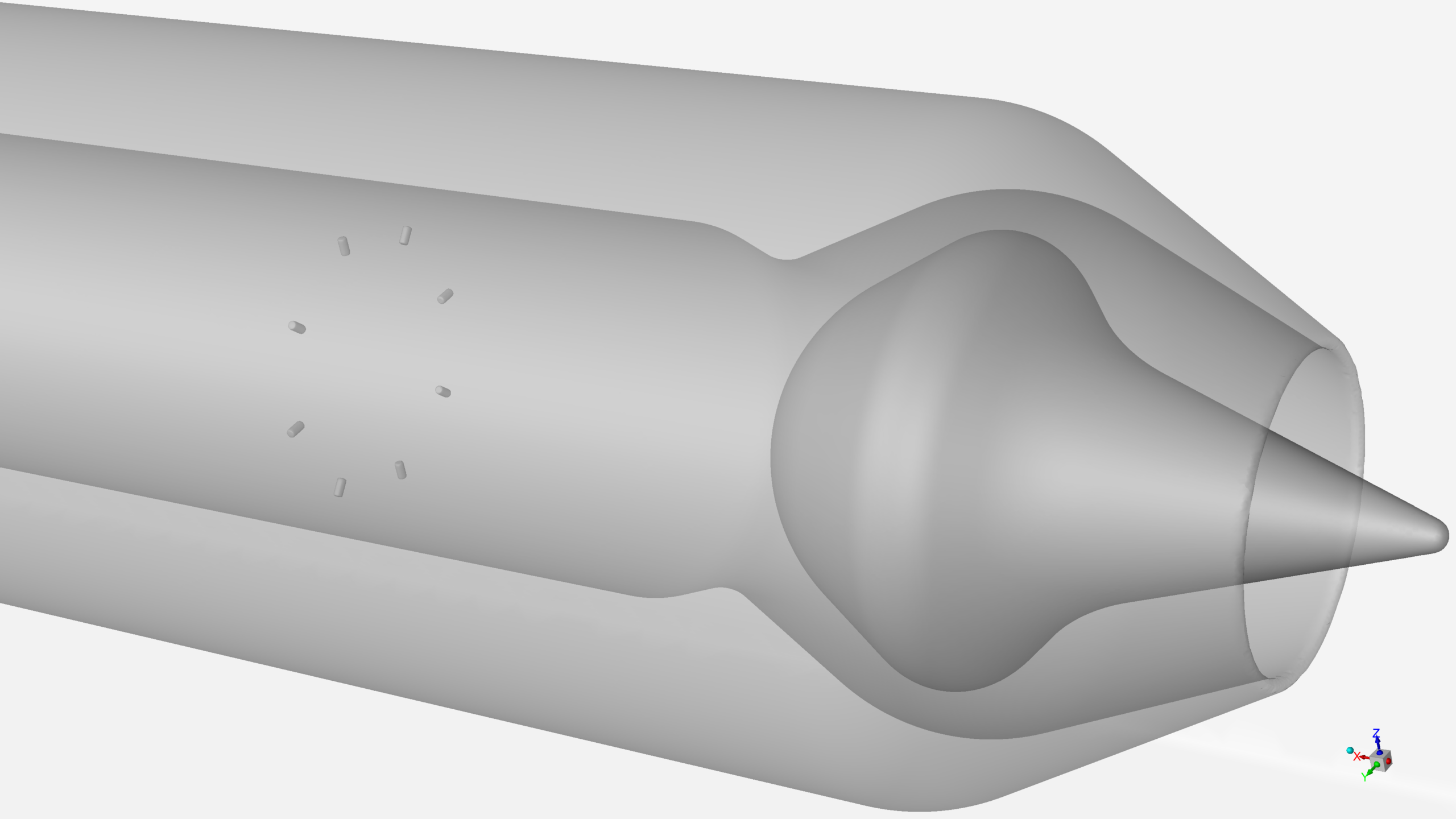 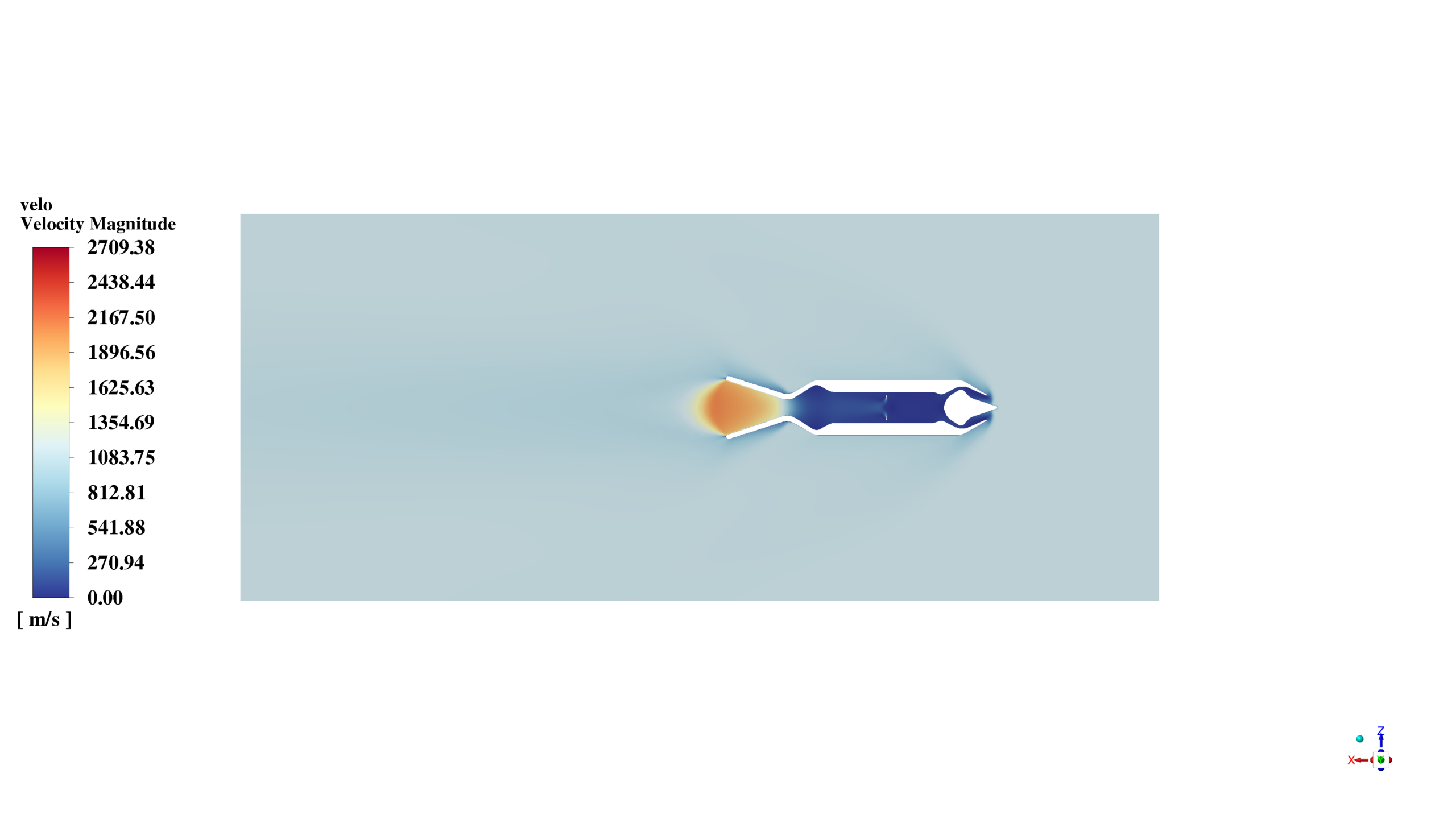 The 2D contour of the Velocity

The 2D contour of the Temperature 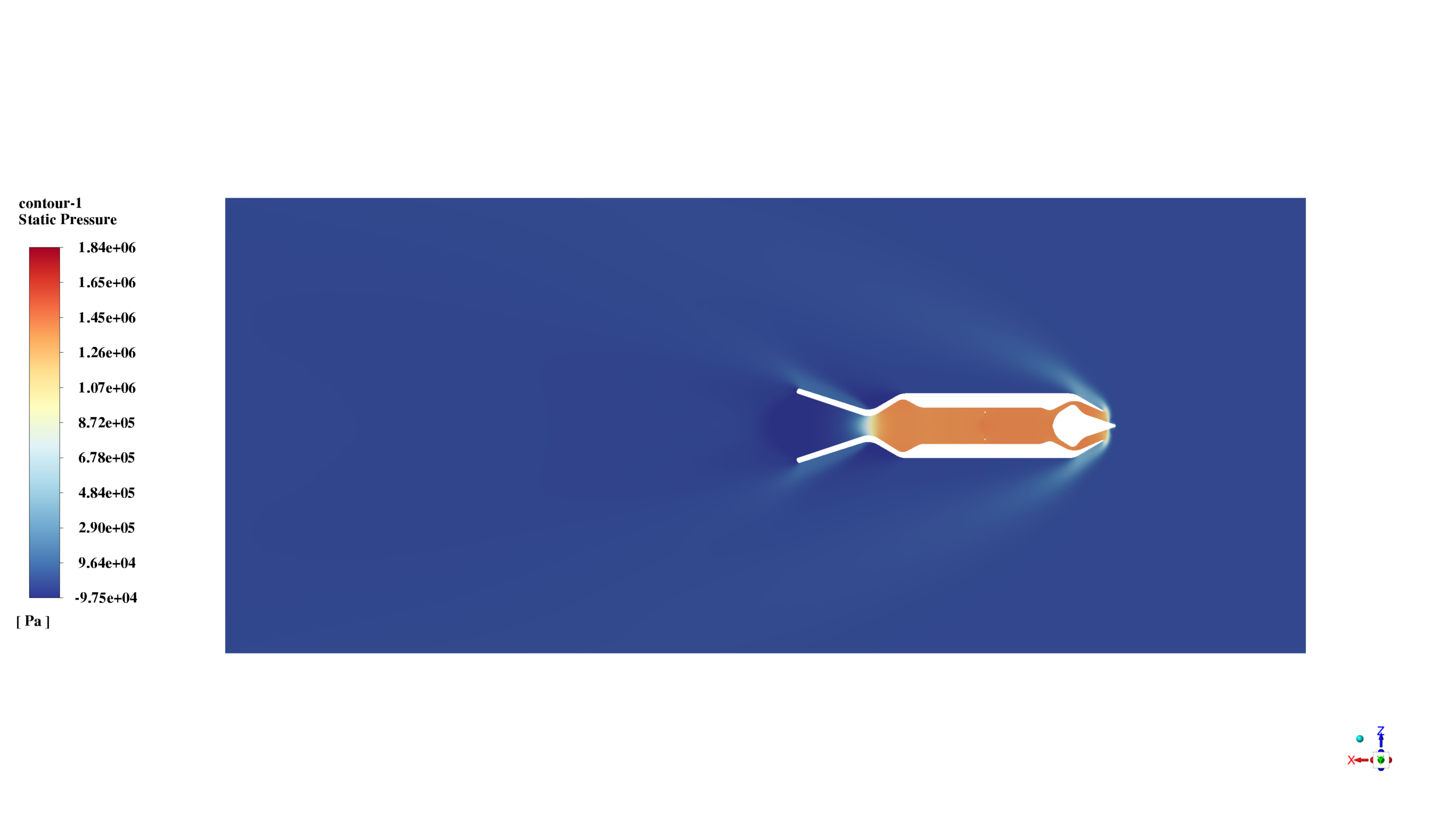 The 2D contour of the Static Pressure 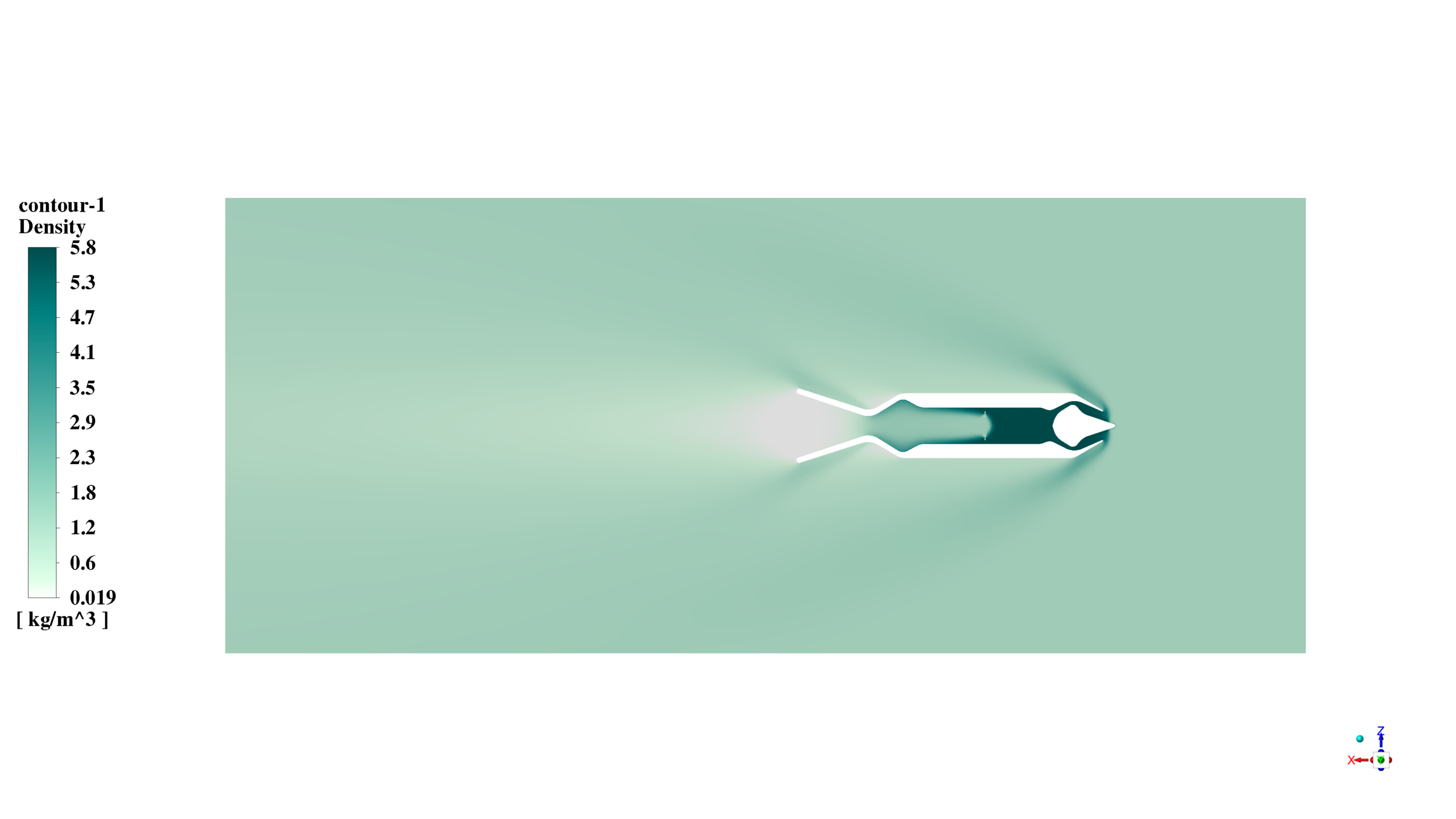 The 2D contour of the Density 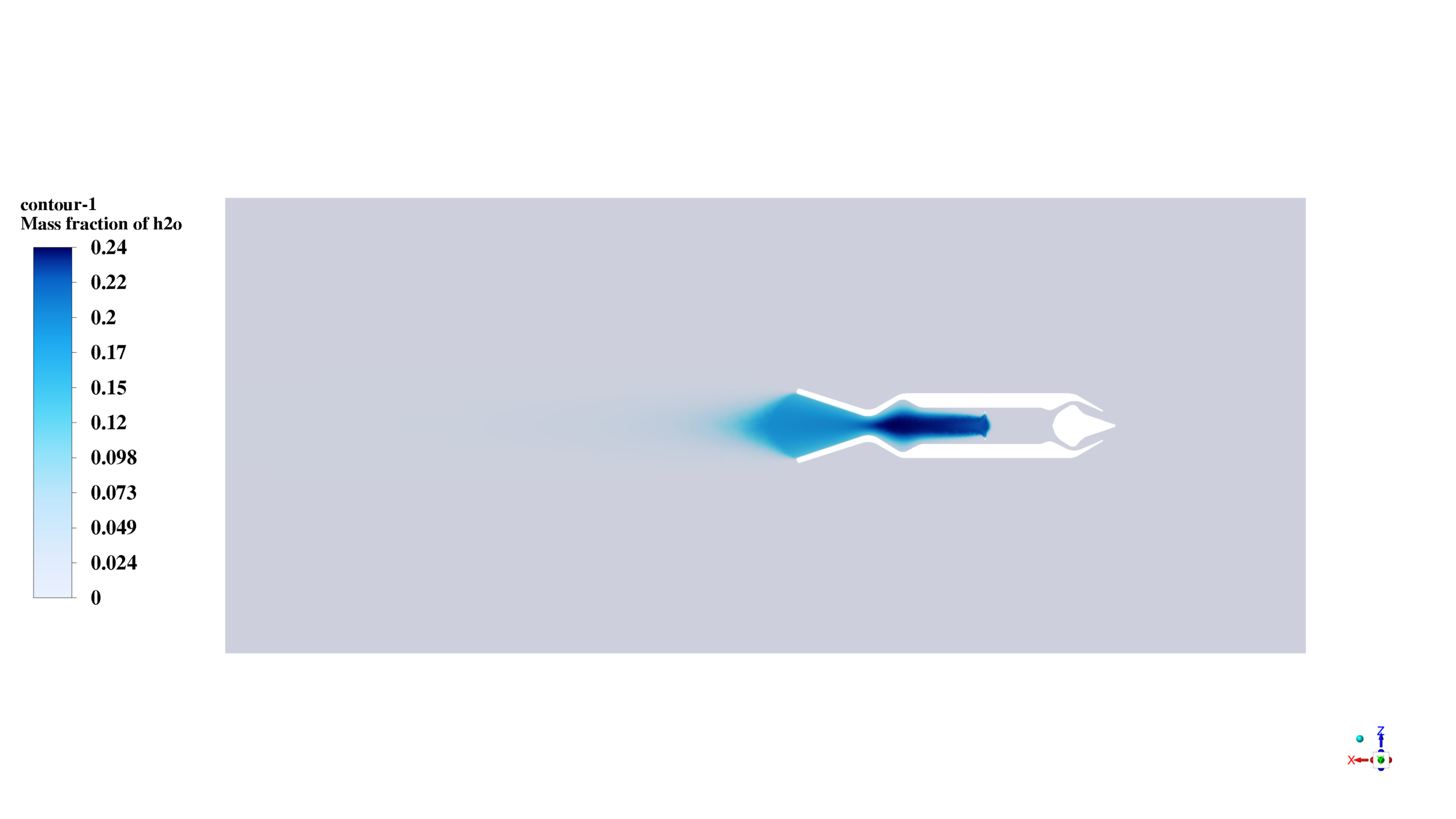 The 2D contour of the  Mass Fraction, Which is the only production of the combustion 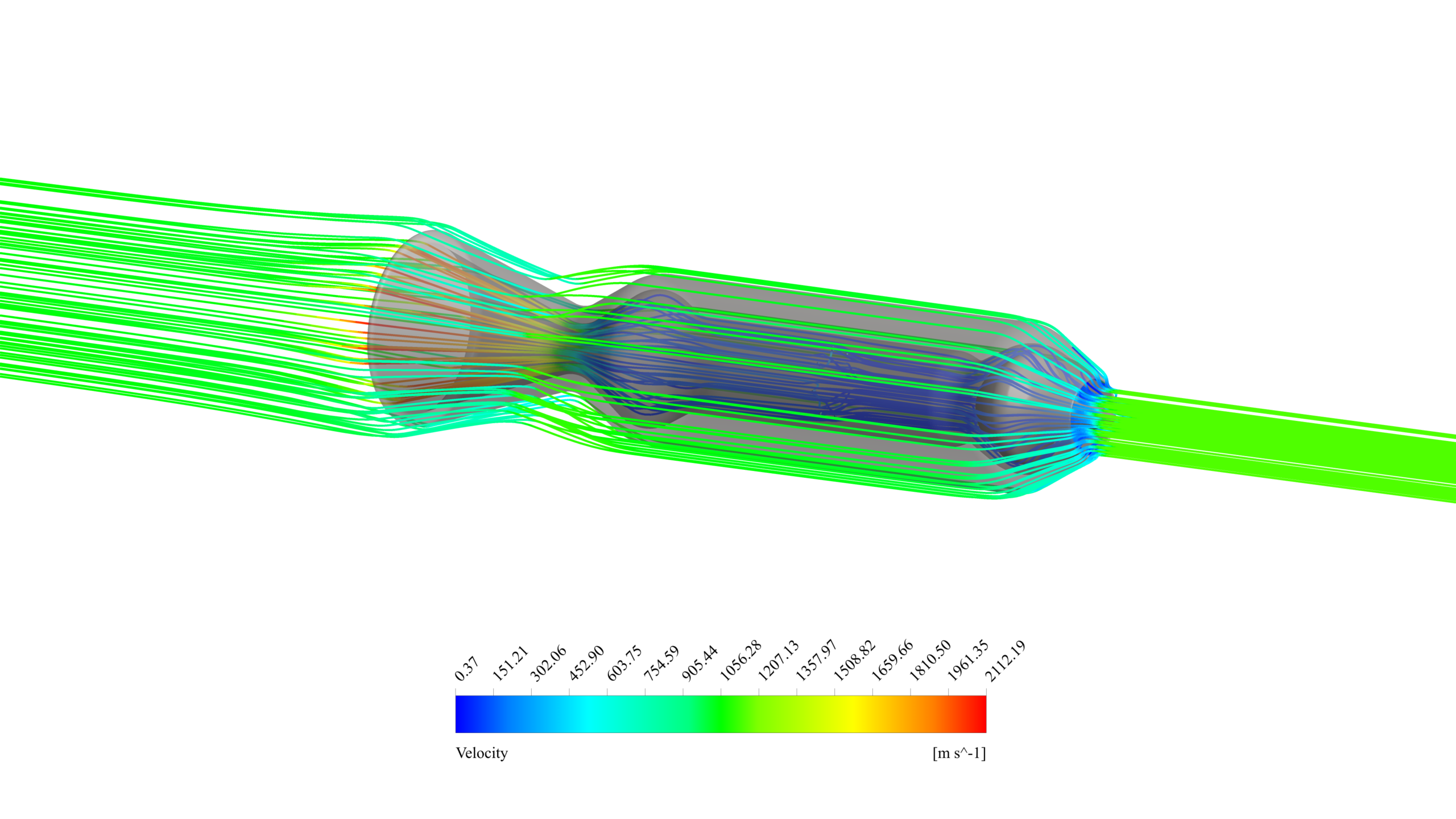 In order to optimize the device performance and to get the maximum use of fuel and consequently the highest thrust number, the Design of Experiment study is carried out on the solution. 3 parameters that affect the results drastically are chosen to examine the effects of their changes. The parameters are as follows:

The optimization case has studied parameters 1 to 3 in the following range:

Finally, 3D plots of the parameters and their effect on the thrust of the ramjet are achieved. 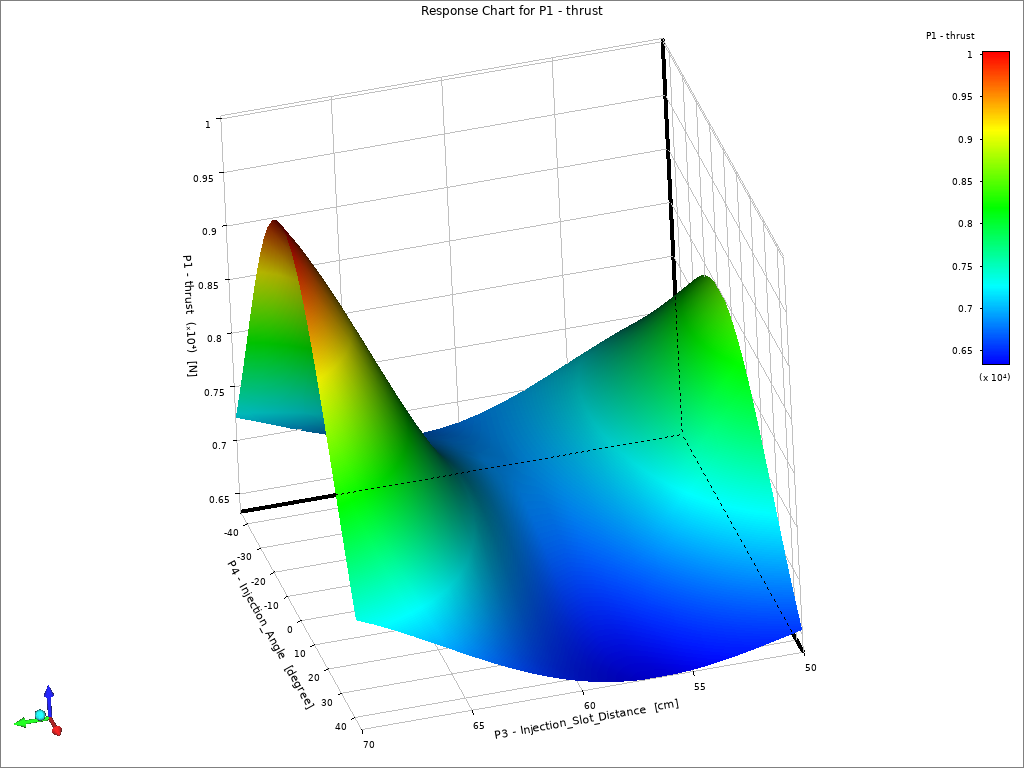 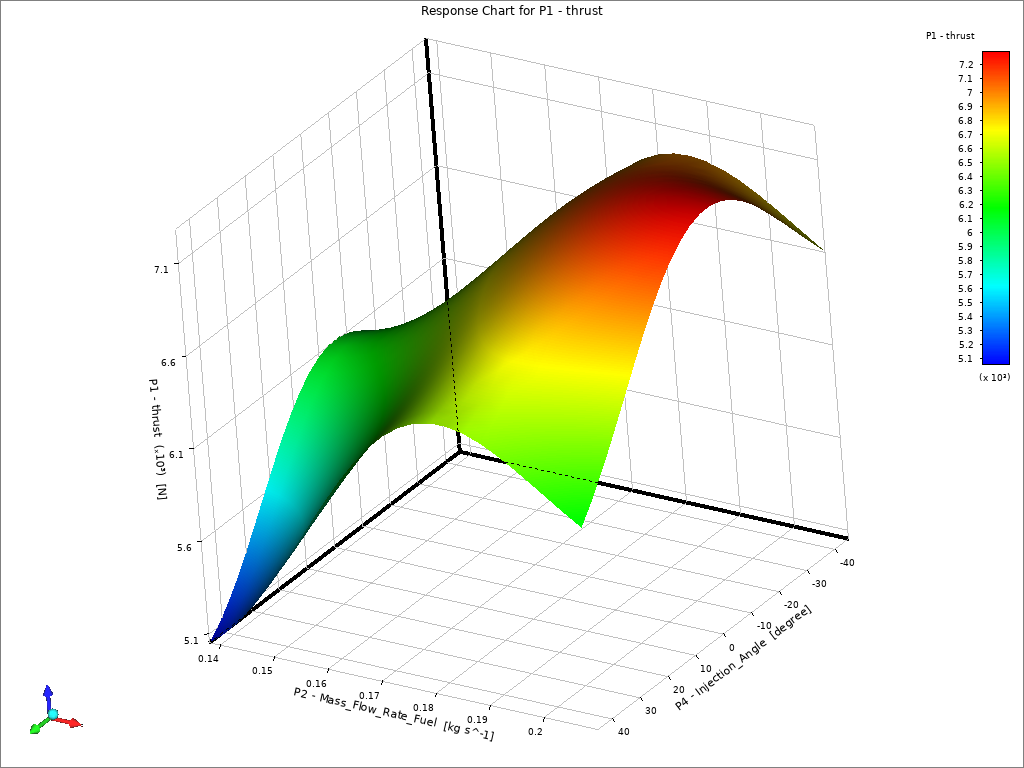 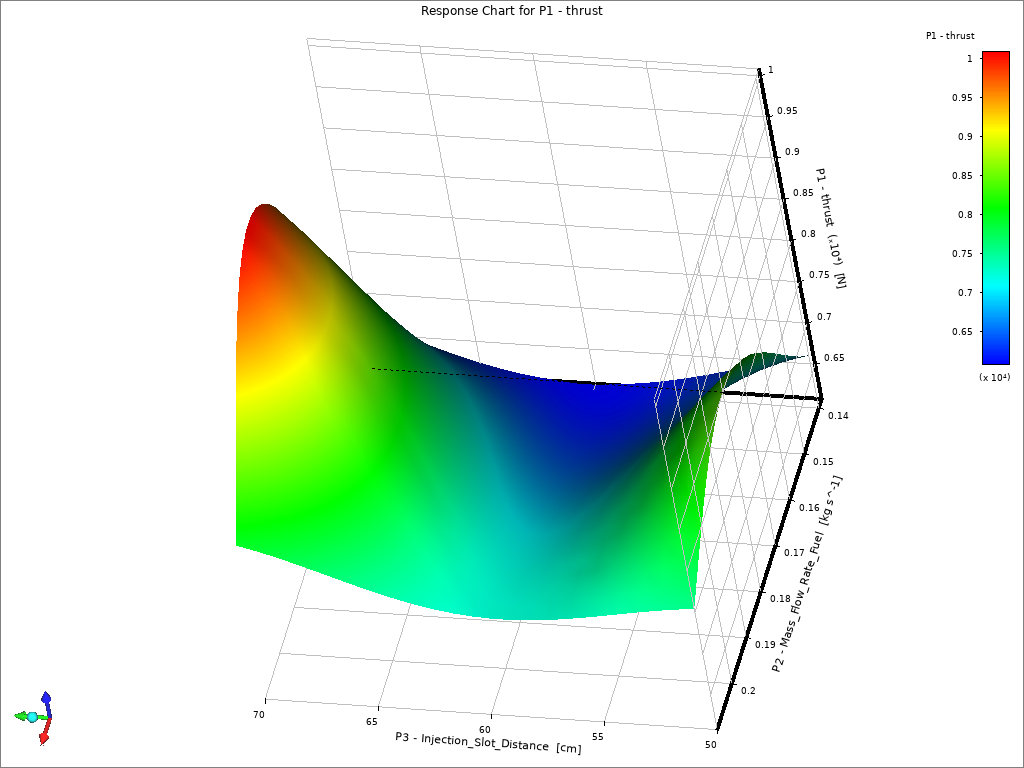 Also, the Local Sensitivity bars show the sensitivity of the output, which here is the thrust number, to each defined parameter: 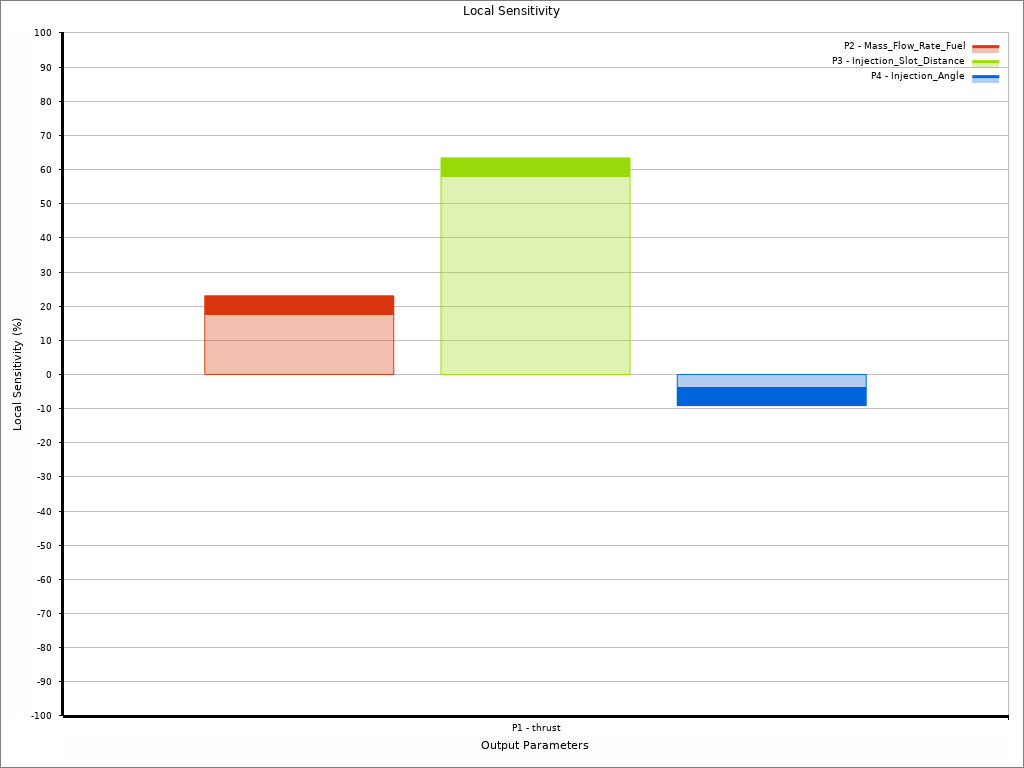 Local Sensitivity of the thrust number to the input parameters

The DOE model also gave us the minimum and maximum amount of the parameters considering their interactions. The highest and lowest amount of the thrust in the carried out simulation would achieve in the following settings: