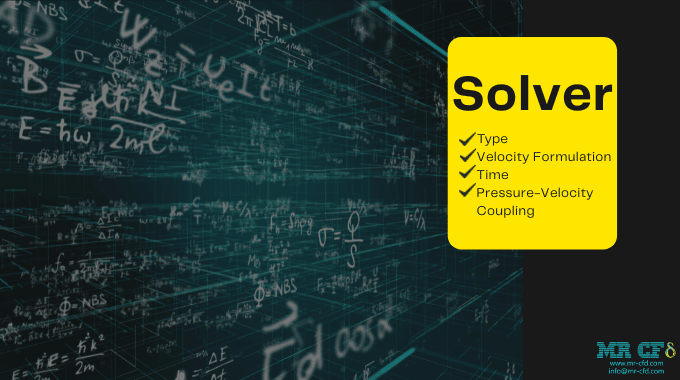 In this blog, we describe Solver Task Page in ANSYS Fluent software. We explain the Type (Pressure and Density Based, and related algorithms), Velocity Formulation (Absolute, Relative), and Time (Steady and Transient). To  enter this section, follow the path below: 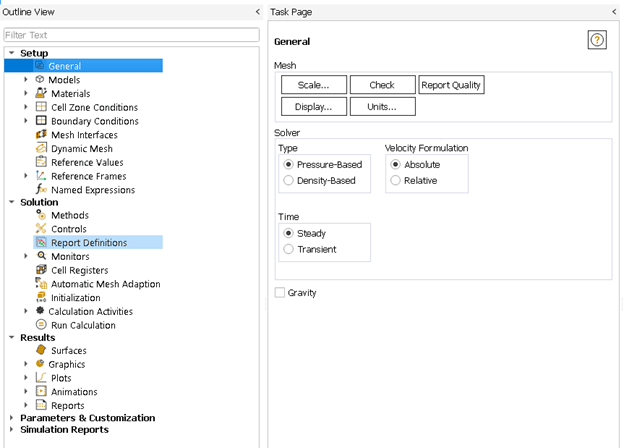 This section is composed of Type, Velocity Formulation, and Time which we will explain in detail below.

One of the differences between the two solvers is that we can use them for high Mach numbers, but density-based solvers give us accurate answers; it even shows us the shock wave resolutions.

Here is how to get the parameters for each of the solvers:

Using Navier-Stokes equations, we can obtain the velocity parameter using the initialize for the pressure parameter, but can this velocity satisfy the continuity equation?

The answer is no because we have only one initialize to pressure, and it cannot be said that this initialize satisfies the continuity equation.

To solve this problem, we use pressure-velocity coupling. In this idea, the speed obtained automatically satisfies the continuity equation using the existing algorithms (SIMPLE, SIMPLEC, PISO algorithms), which use them based on pressure.

There are two algorithms for pressure-based solvers in ANSYS Fluent software:

In the Segregated method, the governing equations are solved one after the other, which reduces the memory used due to the serial nature of the equation solution, but it also reduces the speed of convergence of the problem.

This algorithm solves the velocity components separately based on the initial value or new pressure and velocity values. The corrected pressure is calculated, and the new velocity and pressure field are calculated based on the corrected pressure value. Then The energy equation, turbulence, and other equations involved in the problem are solved. Finally, if the problem converges, the solution is interrupted. Otherwise, the previous values ​​of pressure and velocity components are replaced with the obtained values ​​, and the problem-solving process is repeated until convergence. 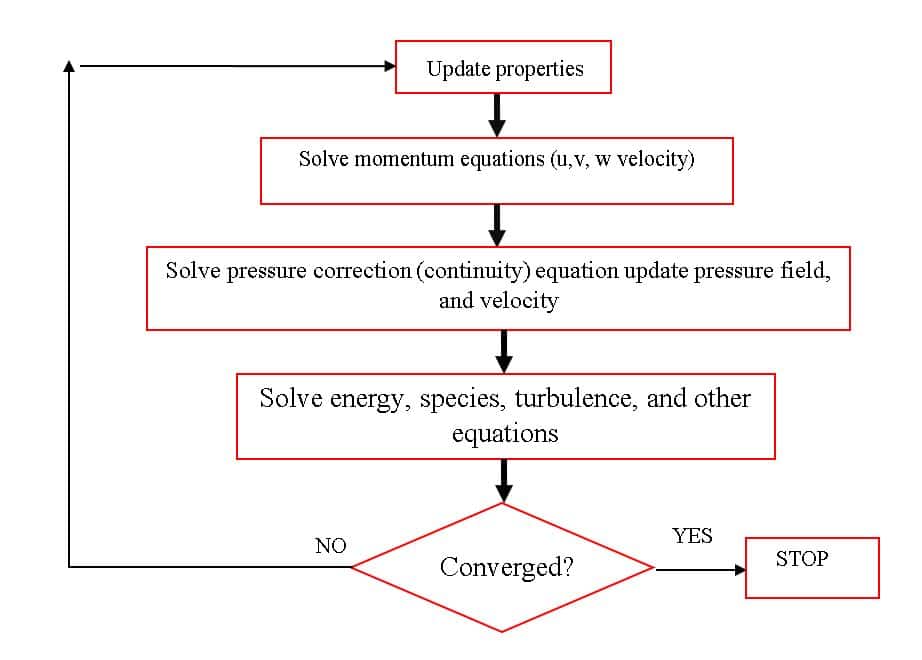 Unlike the segregated method, the coupled solution method solves a set of momentum coupling equations and the pressure-based continuity equation, so there is no need to solve the pressure correction equation. After solving the pressure and velocity field as a coupling, the rest of the equations, such as energy and turbulence, will be solved separately as in the previous method.

Since, in this method, the equations of pressure and velocity are solved simultaneously, the convergence speed of the problem will be higher, but the memory occupied by the software will be 1.3 than in the case of the segregated method.

The density-based solver simultaneously solves continuity and momentum equations, energy equations, and species. Other equations such as turbulence are solved separately. Since the equations are nonlinear, it is necessary to solve the problem repeatedly. 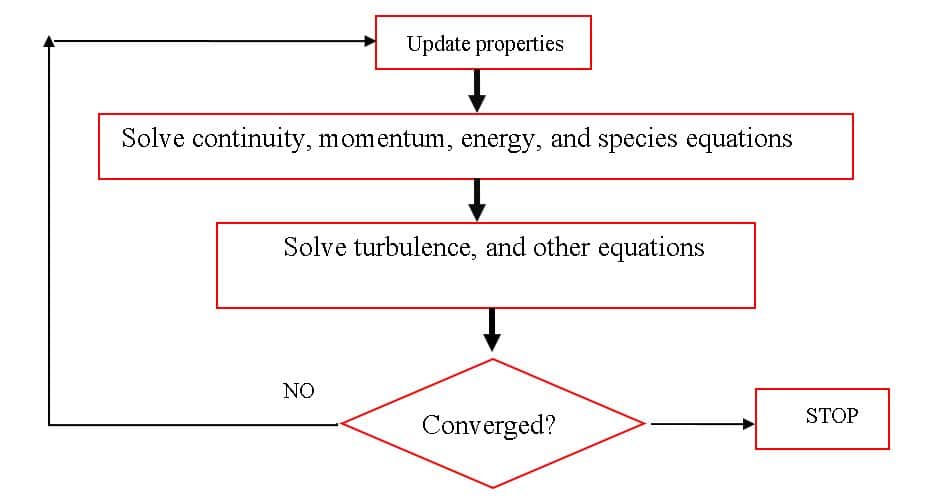 Both explicit and implicit formulations can be used to solve coupled equations. In both methods, solving the system of equations requires that the discrete nonlinear governing equations be linearized, which leads to the formation of an equation system for the dependent parameters in each computational cell.

In the explicit method, the existing and previously calculated values ​​are used to obtain the unknown parameter in each cell. As a result, each unknown problem will appear in only one equation of the system of equations. In the implicit method, however, the unknown parameter is obtained from a relationship that uses both known and unknown values ​​of the cells around the cell in question, leading to each unknown appearing in more than one equation in the system of equations.

In cases where the flow in the majority of the domain is not rotating, the absolute velocity formulation is chosen (e.g., Golf ball Aerodynamics) 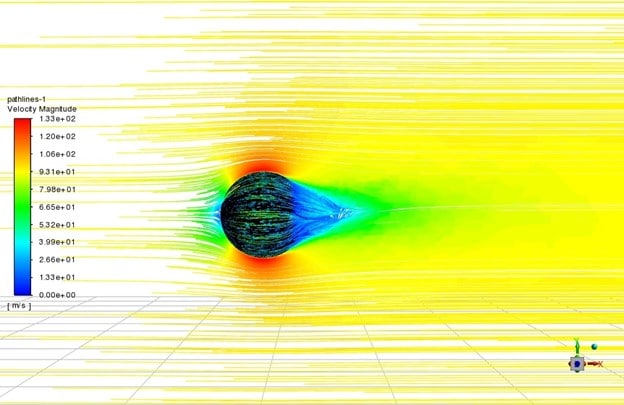 For example, the above figure shows the Rotating Impeller‘s Geometry, the left figure of a small impeller in a vast computing domain (Only the flow near the impeller is predicted to rotate, and much of the flow farther from the impeller is expected to have a low-velocity magnitude in the absolute frame. As a result, solving in the absolute formulation is advised.). The right figure shows a large impeller in a computational domain(Most of the flows will rotate at speeds close to the impellers; The flow velocity would be low compared to the impeller speed if the case were solved in the relative frame. As a result, the relative velocity formulation is correct) of approximately the same size.

Steady-state or steady solutions are acceptable only if transient fluctuations can be ignored. With this in mind, most flows that occur in nature are transient.

Steady-state solutions are still used in computational fluid dynamics due to computational costs and reduced simulation time. But most of the simulations performed in ANSYS Fluent software, such as multiphase flows, rotating machines, etc., are transient. In addition, all steady solutions can be done using the Transient solver.

For example, consider a Shower Channel Drain; when you open the water, The water is quickly released, and the temperature is transient. The temperature will be cold at first, then too hot, and then the optimum temperature, resulting in the steady-state. 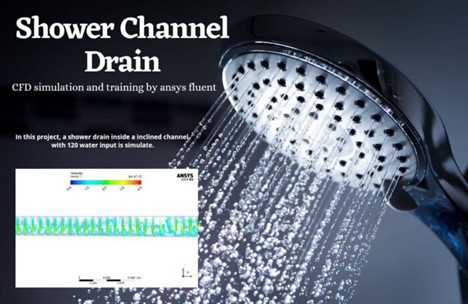 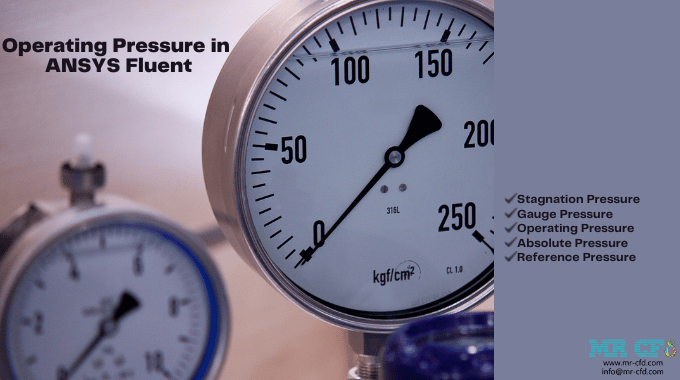 This blog describes the type of pressure like stagnation or total, atmospheric, gauge, and operating… 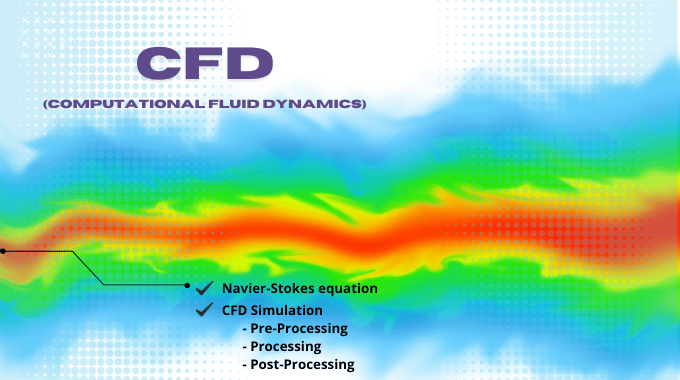 In this video, we first explain the Navier-Stokes equations and definition of CFD then the… 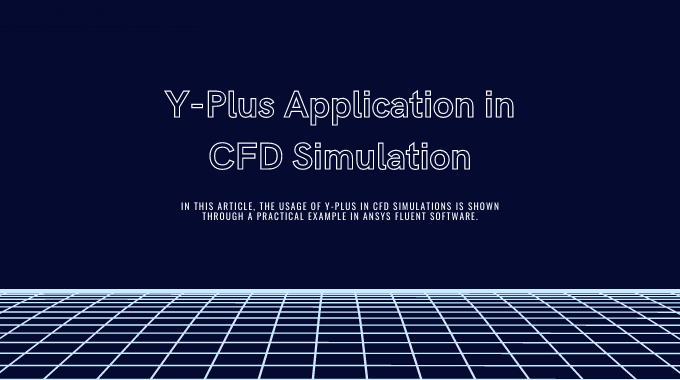