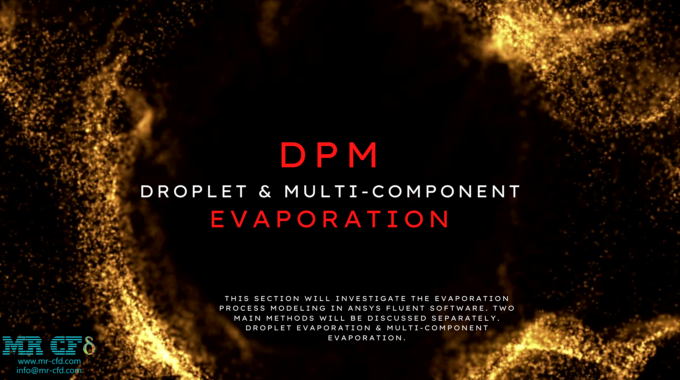 As the H2O mass fraction contour one shows, evaporation happens after the injection of wet rice particles into the hot ambient of the rice drying device. The simulation is done using evaporating droplets, which has been discussed earlier. For more details, check the link.

The droplet could experience three different periods after injection, and each period has its laws and equations from the heat transfer aspect. The particles enter the hot domain with injection temperature, increasing to vaporization temperature over time. So in this zone, Tp<Tvap also is known as inert heating zone. After that, the process continues in the vaporization zone until the temperature gets to boiling point. In other words, the vaporization occurs where Tvap<Tp<Tbp. Check out figure 2.

Theoretically, heat is transferred between the droplet and its environment through convection and radiation mechanism (Figure 3). The first law of thermodynamics states that a system’s total energy and surroundings are conserved. Note that the droplet is assumed to be spherical, and Nusselt number is defined as:

To obtain the governing equations, remind that there is no evaporation and mass transfer in the inert heating zone (Tp<Tvap), So, According to the first law of thermodynamics:

As the droplet’s temperature enters the vaporization zone(Tvap<Tp<Tbp), evaporation is being taken place, so another term is added to the previous equation:

Fundamentally, during law 2, the vaporization rate is defined by gradient diffusion that relates flux of vapor part of the droplet to the gas phase of ambient. As mentioned before, the driven force is the difference between the vapor concentration of the droplet’s surface and its environment:

Eventually, the mass transfer coefficient is calculated from the Sherwood number correlation:

Note that saturation vapor pressure( ) and diffusion coefficient of vapor in bulk( ) should be defined manually in the software from the Materials section(figure 5). Also, to consider radiation terms in calculations, you need to determine the P1 or discrete ordinates (DO) radiation model from Models => Radiation and then active Particle Radiation Interaction from discrete phase window (figure 6).

By default, Ansys Fluent uses the diffusion-controlled model for the vaporization/boiling model. We don’t get into more details in this article, but it would be better to use a convection/diffusion-controlled model when high evaporation rates. For slowly evaporating droplets, both models are expected to give similar results. It is available in the materials tab, as shown in figure 7.

When the droplet’s temperature reaches boiling point , the droplet remains at a fixed temperature ( ), and the third law is applied to predict the convective boiling of a discrete phase droplet. Note that the model requires and without considering radiation terms, the governing equation is defined as:

Compared to the droplet evaporation model, the multi-component evaporation model is more comprehensive and closer to the actual liquid evaporation because real liquid consists of multiple species, each with its specific properties. Naturally, the light components vaporize first and leave the heavier components, which take longer to vaporize. By employing a multi-component model in Ansys Fluent software, we can define several species and their components. Still, it also requires accurate input parameters, including partial pressure, mass fraction of each component, etc.

As mentioned in evaporating droplet’s blog, the driven force of vapor flux is the difference between the vapor concentration of the droplet’s surface and its environment. In a multi-component model, the parameters should be defined for each species:

Theoretically, the partial pressure of species is calculated from the equation:

In Ansys Fluent software, the above equation simplifies by considering the gas to be ideal. It is known as Reuolt’s law, So the vapor-liquid equilibrium expression is:

Before getting to the injection part, we need to define both liquid and vapor phase species in the Materials tap shown in figure 9. To do that, follow the steps: 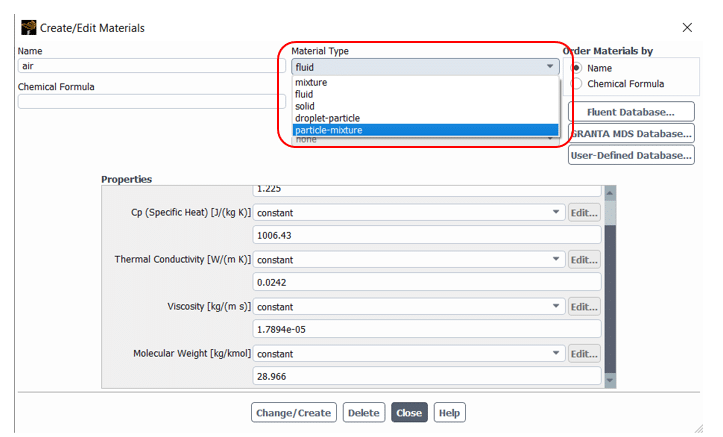 After that, the multi-components settings are accessible in the Injection section. As shown in figure 10, the mass fraction of components can be set in Multi-component Setting located in the Components tab. 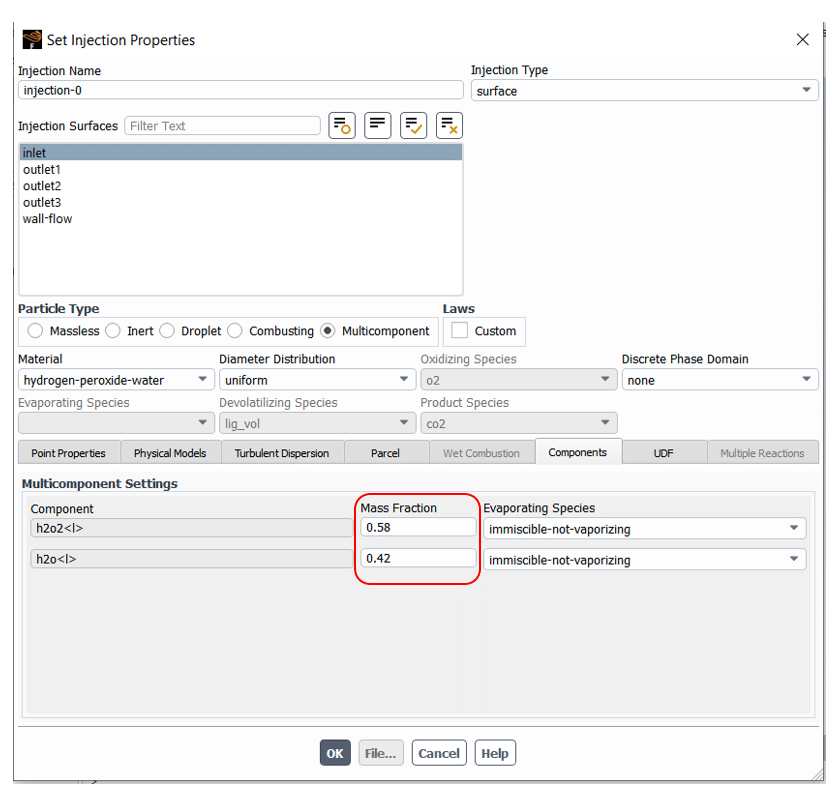