This product simulates “CFD simulation on the effect of primary nozzle geometries for a steam ejector in refrigeration cycle” paper, and validates the article results.

There are some free products to check the service quality.

To order your ANSYS Fluent project (CFD simulation and training), contact our experts via [email protected], online support, and WhatsApp.

The present problem simulates the water vapor flow inside a steam ejector by ANSYS Fluent software. This numerical simulation is based on the reference paper “CFD simulation on the effect of primary nozzle geometries for a steam ejector in refrigeration cycle” and the results of the present numerical work are compared and validated with the results in the reference article. An ejector is a mechanical device that uses an actuator fluid to suck a secondary material (gas, liquid, or solid particles), and finally the actuator fluid and the suction substance are mixed together and exit from the system.

Ejectors have two main functions, including vacuuming and suctioning gases, as well as mixing fluids. The ejector modeled in the present work has a convergent-divergent structure and inside it, a convergent-divergent nozzle is located. The operating mechanism of this ejector is such that the water vapor enters the ejector as the primary fluid and by passing through the convergent part of the nozzle, which has a smaller cross section, it accelerates and according to Bernoulli’s law, the pressure decreases.

On the other hand, this pressure drop causes a pressure vacuum inside the ejector and as a result causes the secondary fluid (suction) to suck into the ejector. The primary and secondary fluids are then mixed together in the diffuser section and compressed. The present ejector is part of a refrigeration cycle; In this way, the primary inlet fluid comes from the boiler outlet, the secondary inlet fluid comes from the evaporator outlet, and the outlet goes to the condenser.

The present model is designed in two dimensions using Design Modeler software. Due to the symmetrical structure of the ejector nozzle and diffuser, only half of the ejector is designed. The geometry consists of two inlet sections for floes related to the primary and the secondary fluid, one outlet for the mixed output fluid and an internal part as the nozzle for the primary fluid flow.

The meshing of the model has been done using ANSYS Meshing software and the mesh type is structured. The element number is 51990. The following figure shows the mesh. 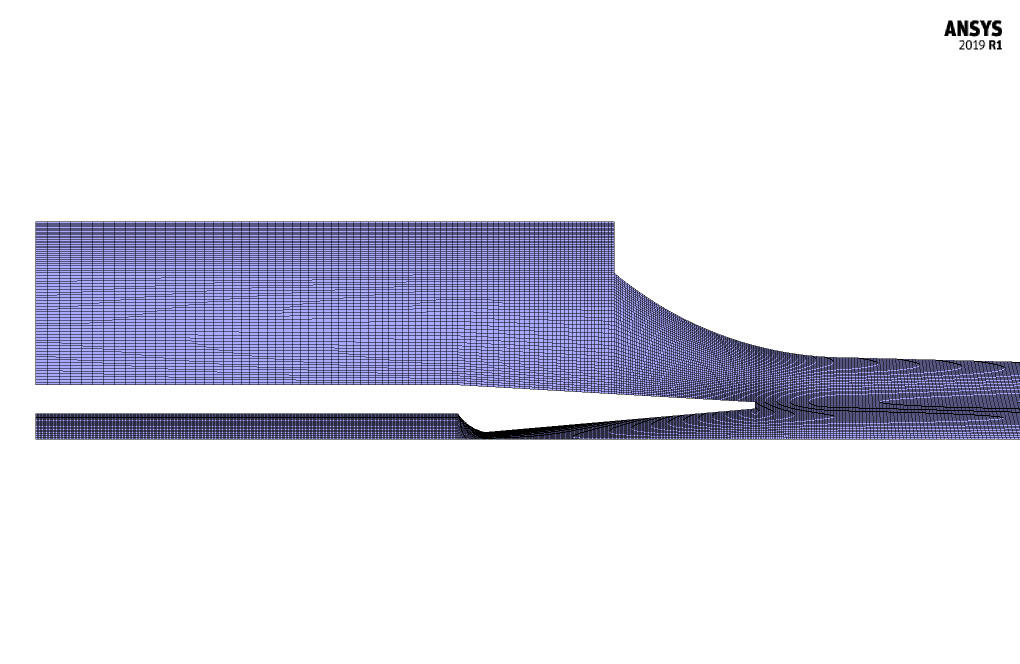 To simulate the present model, several assumptions are considered:

A summary of the defining steps of the problem and its solution is given in the following table:

This ratio has been compared and validated with the value in Table 3 of the reference article (the d2M4 mode in the table).

Also, after the completion of the solution process, we obtain two-dimensional contours related to Mach number, pressure, velocity, and temperature.